Take the plunge with Adventure Canada 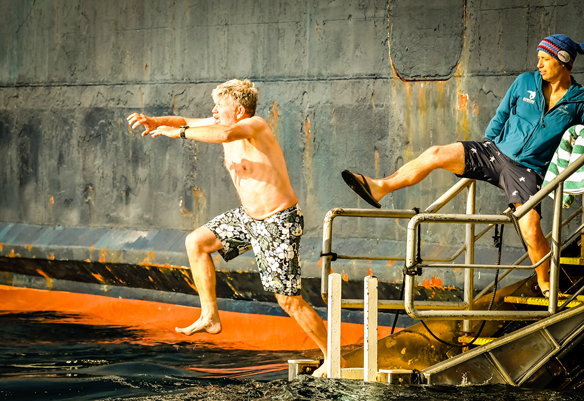 Adventure Canada gives intrepid clients on its High Arctic Explorer cruise a chance to grin and dare it.

The sailing works its way from the northern Nunavut community of Resolute to the west coast of Greenland, with passengers at one point invited to jump into frigid Arctic ocean waters from a ship ramp, while their vessel is anchored off of Greenland.

This 2019 sailing saw a record 105 Ocean Endeavour passengers take the polar plunge, which had a Hawaiian theme that invited guests to sport brightly hued Hawaiian leis, while leaping into the water. (Enthusiasm for the jumps isn’t universal, with Dominick Merle, who did the cruise in 2018, saying, “I watched.  Polar bears can swim fast.” Another person on the 2019 sailing joked that the number of people eager to jump into water that was little above freezing demonstrated that the Ocean Endeavour was a “ship of fools.”)

Most who jumped in in 2019 were only in the water briefly, scrambling back up a ladder onto the ship, where they were given vodka in a shotglass that read Polar Dip Survivor and later received badges that read Adventure Canada Polar Swim Team and had a polar bear image.

“I’ve actually told him not to do that (stay in Arctic water for extended periods) anymore,” says the tour company’s Brian Faber, worried about Houston’s well-being.

Entertainer Thomas Kovacs, who has performed on many Adventure Canada sailings, estimates he’s done the Arctic water jump around 10 times. “I am always nervous beforehand, but thankfully Adventure Canada staff whip up the frenzy so much you don’t think about it too much. And as always, coming out of the water feels absolutely exhilarating!”

Seeing 105 of the 164 passengers on the 2019 High Arctic Explorer cruise voluntarily jump into water that one Adventure Canada staffer says can result in a sensation of being jabbed by a 1,000 knives was a welcome development to Faber, who marked the milestone by fulfilling his promise to jump in wearing only a thong if a new record was set.

“They came through with flying colours,” he says of the hardy sorts, none of whom had to be attended by the ship’s doctor, who was on standby. “All got out under their own power.”

Faber – who points out jumpers can be tethered to the ship if they wish and the ship’s doctor and safety Zodiacs are on hand when people undertake the dare – says it’s understandable some are nervous, but he believes people should face their fears.

And he suggests there may even be freebie therapeutic benefits for the jumpers.

“I’d like to point out that cold water immersion activates the body’s natural healing powers that can relieve the symptoms of many medical conditions and promote a sense of health and well-being. When practiced on a regular basis, cold water immersion can even provide long-lasting changes to your body’s immune, lymphatic, circulatory and digestive systems that enhance the overall quality of your life and best of all it’s absolutely free!”