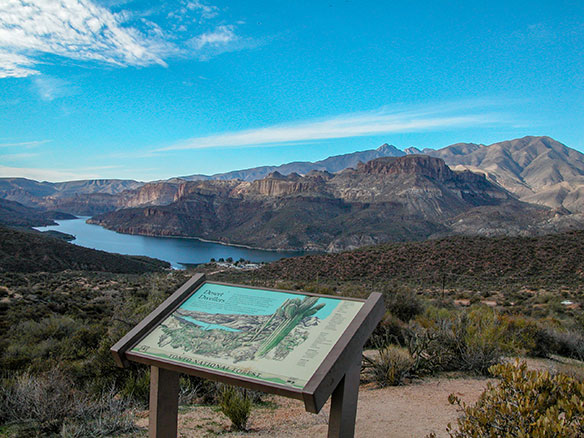 (Photo above: Dramatic desert landscapes can be explored by those visiting Phoenix)

Douglas MacKenzie doesn’t believe his landlocked state is at a disadvantage when it comes to attracting tourists because it doesn’t front ocean.
MacKenzie is spokesman for Visit Phoenix and says those vacationing in his Arizona city of Phoenix who want to cool off in water can easily do so in a swimming pool.
And he believes that pools can be more inviting than ocean.
“I would rather be in a resort pool in Phoenix than stepping on a jellyfish in the ocean,” he says.
MacKenzie says his sun-soaked city has plenty of swimming pools and other outdoor offerings for visitors, pointing to the area’s more than 200 golf courses and numerous opportunities for hiking, biking and other ways of exploring the surrounding desert.
That desert – home to the likes of sometimes towering and protected saguaro cactus – provides often dazzling landscapes and sunsets, with the latter featuring shades of pink and turquoise.

Star-gazing amazing
Nighttime desert tours are available and the area also offers great star-gazing, with MacKenzie himself having used a telescope to spot such heavenly bodies as Venus and Saturn.
MacKenzie says his city – which sees around 330 days of sun a year – has an energetic population but adds those visiting it don’t have to lace up hiking boots, with the city having a flourishing spa scene for those wanting to be pampered.
“Golf is big, spa is big and our culinary tourism is wonderful,” MacKenzie says, adding Phoenix is home to seven James Beard-nominated chefs.
Even Phoenix’s airport has great dining options, he continues, adding if he arrives in it in the evening from another city he patronizes one of its restaurants.

See the Heard
The city’s cultural attributes include the Heard Museum, which has the largest collection of native artifacts in North America, and the Musical Instruments Museum, which counts one of John Lennon’s pianos among its claims to fame.
MacKenzie suggests that the gap between the Canadian and US dollars is partly offset by some of the value products available in Phoenix, among them a light rail system that costs $4 and links the airport with Phoenix and some nearby cities.
Meanwhile, Visit Phoenix has welcomed Air Canada rouge’s decision to launch Montreal-Phoenix service. Air service is also available from Toronto to the Arizona city and numerous points in the West as well.