Underground at The Mob Museum 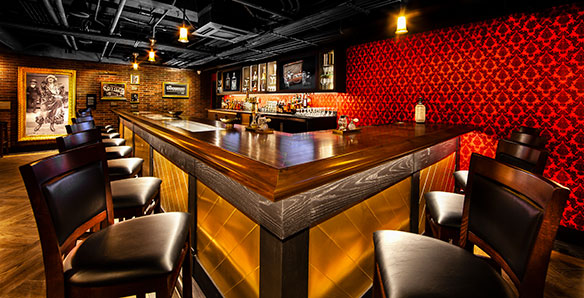 A new Prohibition exhibition featuring a working distillery and speakeasy – known as The Underground – is now open at Las Vegas’ The Mob Museum and taking visitors on a journey back in time.
Situated in the basement of the Museum, The Underground encompasses 2,814 sq. ft. and is appointed with luxurious art deco design motifs. Guests of The Underground are encouraged to ponder the time when consuming alcohol was not only a criminal act, but also bred secret watering holes – some of which became the most glamorous places to be.
Speaking with Canadian Travel Press, Geoff Schumacher, senior director of content, The Mob Museum, said the Underground prohibition history exhibition, along with three other new experiences on the first floor, are designed to enhance and expand the museum’s presentation of the story of organized crime and law enforcement.
“In the Crime Lab and Use of Force Training Experience, guests learn more about how police officers do their jobs and the challenges they face. The Organized Crime Today exhibition brings the story up to the current day and takes a global perspective. The Underground is an immersive experience in which guests venture back in time to the Prohibition era and actually enjoy a handcrafted cocktail from our speakeasy and distillery.”
He added, “Since opening, all our new experiences have generated overwhelmingly positive feedback across the board. Anecdotally, we’ve heard from our guests participating in the Use of Force Training Experience they believe everyone would benefit from the experience because it’s so eye-opening. Meanwhile, The Underground gets rave reviews for its atmosphere, exhibits and cocktails.”
Jonathan Ullman, president and chief executive officer, The Mob Museum, commented, “We are extremely proud of this addition to the Museum, which was developed to tell the story of this pivotal period of American history in the most dynamic way possible.”
Numerous exhibits and artifacts found in the distillery and speakeasy add depth and context to the experience, including:
A five-gallon whiskey still, an example of one of the smaller home stills used to make alcohol during Prohibition.
Valise with hidden flasks produced by Abercrombie & Fitch, with a brass stud on its base that, when swiveled, reveals a tiny keyhole. Once unlocked, the false bottom opens to reveal three silver flasks.
One-gallon “alky cooker” like those used by impoverished families employed by Chicago’s Genna brothers to make small batches of liquor in their homes.
Grape brick sign, which advertised the blocks of grape concentrate sold in grocery stores. These blocks could be combined with water to make grape juice. Of course, yeast could be added, the mixture poured into a bottle, the bottle corked and, three weeks later – home-made wine.
Budweiser frozen eggs, which along with more than 25 other non-alcoholic products, carried Anheuser Busch’s most popular brand name during Prohibition. Other products included soft drinks, malt extract, corn syrup and truck bodies. The frozen eggs were sold in 30-pound canisters and stabilized with sugar and salt.
Beaded chiffon dress, circa 1926, which provides an example of the new and bolder fashions that became popular during the Prohibition era due to the rise of flapper culture.
A unique aquarium exhibit, produced in conjunction with The Animal Planet series “Tanked,” tells the story of the 1922 sinking of the Lizzie D, a tug boat believed to have moonlighted as a rum runner, off the coast of Fire Island, New York. The 440-gallon tank memorializes the discovery of the sunken vessel in 1977, which was indeed found to be carrying crates containing hundreds of bottles of Kentucky bourbon, Scotch whisky and Canadian rye whisky.
Master distiller in residence, George Racz oversees the initial production of corn-mash moonshine in The Underground’s 60-gallon, custom-made copper-pot still. Capable of producing 250 750 ml jars of moonshine per week, the still forms the focal point of the distillery. In the speakeasy, The Underground’s moonshine provides the centrepiece of the cocktail collection, while a full bar is also available.
The speakeasy cocktail menu includes typical Prohibition cocktails such as Bee’s Knees, Underground Old Fashioned, Ginger Jake and Giggle Water. A variety of coffee cocktails, draft beer, bottled beer, wines by the glass and non-alcoholic cocktails are also available.
For private groups and intimate events, a VIP hideaway called “The Fitting Room,” concealed by a secret entrance off the speakeasy, can accommodate up to 12 guests.
Entrance to The Underground at The Mob Museum is free with general museum admission until 5 p.m.; guests who wish to visit just The Underground after 5 p.m. may enter via an exterior side entrance free of charge until closing.
The new hours of the museum, including The Underground, are 9 a.m. to 10 p.m., Sunday through Wednesday, and 9 a.m. until midnight, Thursday through Saturday.
(www.prohibitionhistory.org) 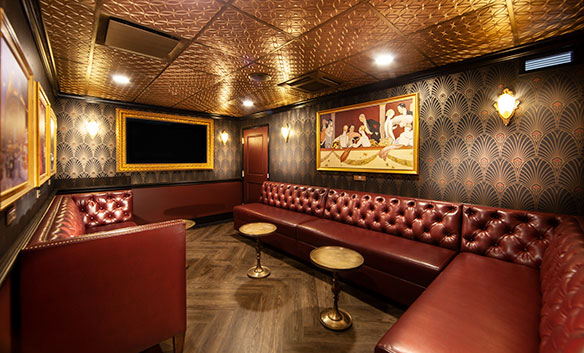