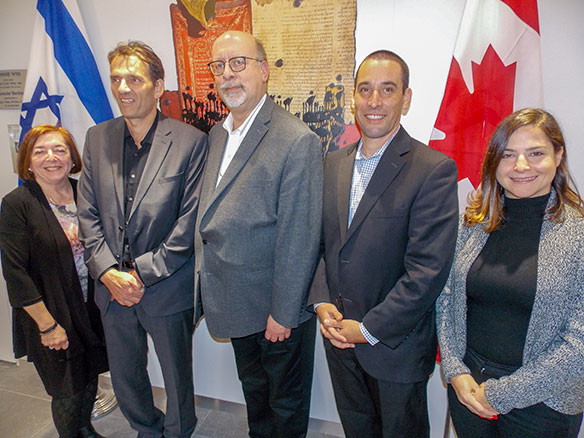 These are definitely good times for the tourism industry in Israel, but top officials aren’t prepared to sit on their laurels, as they clearly know just how competitive this business is.
In fact, the director general of the Israel Ministry of Tourism (IMOT), Amir Halevi, and its acting director of the overseas department, marketing administration, Eyal Carlin, were in Canada this week to meet with airlines, tour operators and OTAs here.
IMOT’s Carlin is quick to point out that Israel broke the 3 million mark in terms of the tourists it welcomed in 2017. And the growth trend is continuing in 2018 with 3.6 million (as of the end of September) visiting Israel, with Carlin clearly confident that the 4 million mark will by passed by year’s end.
Both Carlin and IMOT’s director general, Amir Halevi said during the briefing in Toronto that reports from the travel trade – airlines, tour operators, etc. – indicate that bookings are “looking fantastic” for 2019.
So why is Israel so hot?
Well, according to Carlin, it all started about three years ago as the destination recalibrated its market strategy, with faith-based tourism as its foundation, IMOT shifted its marketing efforts to focus on the urban experiences that leisure travellers were offered by Jerusalem and Tel Aviv, along with showcasing (and hosting) numerous major sports activities (such as marathons, cycling competitions, etc.) – essentially revealing to travellers the wonders of Israel’s present that they may, or may not, have been aware of.
The numbers certainly tell the story as that strategy has captured the attention of tourists, but in order to make sure that it was able to capitalize on this interest, IMOT launched an marketing incentive program that supported airlines adding service to the destination.
It has been a massive success, attracting flights from China, India, South America, plus additional service from Europe (particularly from second and third tier cities) and from North America as well.
With the growth in leisure tourists, Israel is now looking to expand its room inventory, and Halevi explained that IMOT has now launched incentive programs to attract investors interested in building hotels.
And he told the Toronto briefing that: “We want to double the number of hotel rooms and we want to do it as soon as possible… hopefully, in [the next] five years.”
IMOT’s director Canada, Jerry Adler is in good spirits these days, reporting that he’s hopeful that Canada will hit the 90,000 mark in terms of tourist arrivals and break 100,000 tourist arrivals in 2019.
Said Adler: “We’ve given the [travel] trade more reasons to sell Israel. It has reinvented itself and continues to reinvent itself.
In fact, Carlin is quick to point out that travel agents are part of Israel’s success, observing that: “A lot of travellers going to Israel rely on agents. They [agents] get repeat bookings. And we value our relationship with agents.”
Stay tuned, there’s lots more to come from Israel.
For more, go to www.israel.travel or visit https://new.goisrael.com/.