Home › Digital Post › Virginia takes it to a new level

Virginia takes it to a new level

‘Canadians love what we have’ 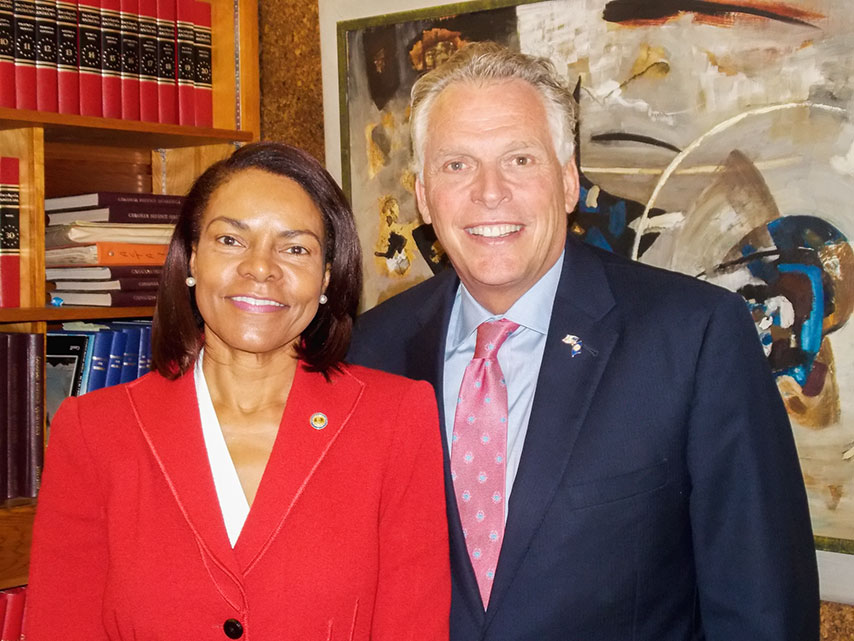 At certain times of the year, Virginia Governor Terry McAuliffe says, you’ll see more Canadian licence plates on the state’s highways than Virginia licence plates.
Considering that right now, Canadians represent 51% of the state’s international visi-
tors that shouldn’t really come as a surprise.
“Canadians love what we have,” Governor McAuliffe told Canadian Travel Press in a recent interview. “We’ve got the beaches. We’ve got the mountains. We’ve got golf courses. We’ve got 320 wineries and 225 craft breweries. We’ve got historic sites. So [Virginia is] a great place to go if you want to see a little bit of everything.”
He noted as well that Virginia is also the home of country music, offering visitors a chance to “go down the Crooked Road and see a lot of different places where they’re
playing music in a lot of great little bars.”
Virginia’s Governor was in Toronto at the end of last month on a trade and tourism mission and made it clear that his state is “so appreciative of the business that is already done [between Canada and Virginia].”
“Canada is our number one-trading partner – as it is for the United States of America … so I’m very pro-trade,” he said. “Between Canada and Mexico – our NAFTA partners – we have 135,000 jobs in Virginia right now. We did $4 billion worth of exports to those two countries. [Canada is] such a strategic partner, not only for Virginia, but Canada is America’s best friend and greatest ally.”

So what about Trump?

That’s all good news, but the question does arise as to whether tourism – which is an industry that’s all about hospitality – is feeling the impact of Donald Trump’s administration.
“It’s a fair question and it’s one that I deal with all the time,” Governor McAuliffe responded, before continuing: “We travelled on our trade missions last year. After the election, we were all over Europe. We just went to Mexico on a big trade trip. I get asked this question a lot – What is the status of America? What is all of this anti-travel, anti-immigrant messaging coming out of the White House? I try to explain to everybody – forget what Donald Trump says. “
Governor McAuliffe continued: “I’ve said this to the president, to his face – he’s hurting us. He’s hurting our ability to trade. He’s hurting the ability of people coming to America. But, in fairness, that’s not who America is, and there’s no reason why you shouldn’t come and visit America because of some of the rhetoric coming out from Donald Trump. I mean, he’s one man at this time who has his opinions, and I would say that a vast majority of Americans today do not share his opinions on these issues.”
And he told CTP: “I’m telling you as the Governor of the great Commonwealth [of Virginia] – Come to America. It is a great place to visit. You are going to have fun. We are open. We are welcoming to everyone.”

Taking it to a new level

Since 2014, the state’s tourism industry has grown by US$2.2 billion, with the Governor crediting the work of Virginia Tourism Corporation president and CEO, Rita McClenny, for that success, as well as “taking the advocacy of Virginia to a new level.”
The Governor continued: “You know, Rita [McClenny] has a promotion for pretty much anything. Virginia is for outdoor lovers – we just kicked that off the other day. [Virginia is for] bike riders, for wine lovers, for craft beer lovers – we’ve got a little bit for everybody here, and I think really promoting it has really helped u.”
McClenny certainly agrees, telling CTP: “We’ve branded our sub-brands which are the reasons that people want to travel. So we’ve evolved with the visitor and their tastes for authenticity; to find experiences that they have not discovered in their own homes and the places where they’ve visited hereforto. So really, we have presented [Virginia] as this extraordinary place where they can make indelible memories with the ones that they love.”
And clearly, McClenny said the state’s “Virginia is for Lovers” marketing tag line “resonates” with vacationers. In fact, it has resonated with travellers for 48 years.
McClenny noted as well that Virginia’s “attractions continue to invest and reinvest to expand the products. Our amusement parks are adding new rides. We have boutique hotels. We have hotels that you won’t find, in many cases, around other parts of the country, like Moxy – which is a new hotel product – Indigo, The Graduate… all of them have built into their products, into their hotels what the consumer is looking for.”

Certainly with the variety that Virginia offers its visitors, it’s not at all surprising that the state draws a good number of multi-generational travellers.
McClenny explains: “When families do find, in their complicated lives, that they have time to get away, they want to get away with all of the people that they love. So they go pick a fun place to go where there’s something for everyone.”
And Virginia, has that “something for everyone” – beaches, mountains, history, wine, beer, food, and lots, lots more, with Governor McAuliffe pointing to the 37 state parks located throughout Virginia as a great way to experience the state.
With Leaf Peeping season just beginning, McClenny told CTP that it is the perfect time for Canadians to plan a trip to Virginia.
With the welcome mat rolled out, McClenny is quick to point out that: “We have so many wonderful ways for Canadians to get to Virginia – 26 flights a day – four airlines – Ameri-can, United, Porter, and Air Canada flying into Dulles and to National and to three cities. Both airports are in Virginia. We are a 10-hour car ride to Northern Virginia, and then if you go to the central part [of the state], it’s about a 12-hour drive. So we say a day’s drive, a wonderful day’s drive to Virginia.”

So, what is it that makes Virginia different from the competition?
“Oh, I think our brand – Virginia is for Lovers – 48 years, and it is recognized around the world,” McClenny said, before continuing: “When you say it, it has a sense of recognition and happiness, and people smile and they have an association with it.”
She explained that: “For us, it’s whatever you love in a vacation, you can find in Virginia. And then when you add to that all of our sub-brands that are related to food and outdoor and beaches and
mountains and sports and music, it all makes it really relevant, and it resonates and through that comes the authenticity of what the attractions and service delivery part of it is. So, I really think it is our enduring Virginia is for Lovers brand.”