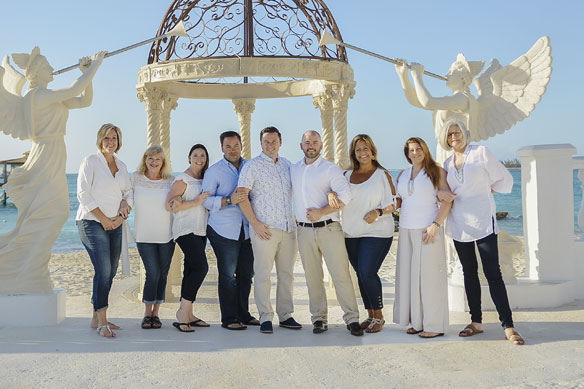 One of the things that Jane Clementino (pictured above far left, with (left to right): Kim Barbisan, Melissa Wallace, Matthew Djorsev, Christian Roussin, Joshua Knox, Shannon Cunningham,
Emily Spadafora, Denise Saunders ) is telling travel agents these days is that as WestJet follows its Vision 2022 plan to become a global airline in the next five years, its “culture of caring” won’t be changing.
Clementino, the carrier’s director of agency sales, told Canadian Travel Press that agents need to know that while the airline’s plan “redefines us to a certain extent and puts us on a different playing field, they also need to know that what we do and how we do it is not going to change. Our whole focus on the guest experience is going to remain our number one focus.”
“We’re going to focus on what’s got us to this point,” she said. “We’re going to continue to use that same business model we have in place now, just on a broader, world stage.”
Noting that while the carrier has 4 wide-bodied aircraft in its fleet today, in the next five years, “it’s on the books for us to have anywhere between 20 and 40 wide bodies.”
She continued: “That’s important for [agents] to know. There [will be] no continent or destination that [will be] out of our scope. We’re not looking at using the same fleet that we have today, so the reach is going to be endless.”
Clementino told CTP that the airline will continue to strengthen its codeshares, revealing that in 2017: “We will have some [fare] re-alignment that we’ll be looking at to make sure that we’re using codes from an international perspective and from a trade perspective that will be welcomed. We’re kind of setting ourselves up to look at the global expansion and then our interaction in our business with our code share partners and we’ll continue to strengthen our partnerships there and [we’ll be] doing a lot more two-way code [sharing].”
“We’re starting to look at their frequent-flyer programs and having kind of reciprocity there – where you can ‘earn and burn’ on different carriers. And we continue to announce different opportunities through our codeshare partners.”
Yet in a world where agents are being constantly bombarded by all sorts of information, it’s only fair to ask Clementino how WestJet is going to get its message of change heard by the agency community.
“That’s a great question,” she responds. “I feel like this year is a year of transition to a certain extent. So, you won’t see a lot of new fleet this year, but it is a building year. So what you’re going to be hearing a little bit more about is what we’re doing within our network – to strengthen our network; to strengthen our frequency; and to have the right schedule for the traveller.”
She continued: “So agents will have seen that we had a number of schedule changes unlike our past and part of that is to build for our future. It’s focused on the hubs.
The three hubs that we have today [are] Toronto, Calgary and Vancouver. In the future, we hope to strengthen everything in the Eastern part of Canada with all that investment which starts up now and continues to October.” 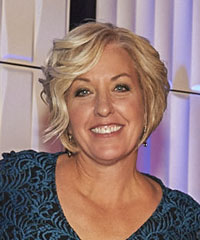 To get that message out, Clementino said that WestJet will be significantly expanding its presence in 2017 through Expos and presentations, which will be going to 32 cities across Canada, so that it can talk to more agents firsthand.
“We’ll field their questions and get their buy-in on the model that we’re bringing to the market and the fact that we’re not changing any of our core business structure, [rather] we’re just expanding where we’re going and how we’re going to get there,” she said.
As for how the travel trade has been reacting to the changes so far, Clementino said simply: “Everybody’s excited,” both the trade and WestJetters.
Clementino told CTP that WestJet regularly connects with its 43-member Travel Agency Advisory Board, and “we talk about everything that’s coming down the pipe.”
“They have heard about Vision 2022 and where we’re going, and we’ve got their feedback [on it] and they’re excited,” she said.
And WestJet certainly helped that excitement along with its recent February announcement that it would be adding 105 more weekly flights in Quebec in 2017 (that’s a 74% capacity increase), making it clear not only where it would be investing in Canada, but also that there would be more to come.
Yet even as it grows globally, Clementino said that WestJet will continue to come into new markets with as low a fare as is possible.
“You know we can kind of come back to the evidence around how successful Gatwick has been for us. We had a 96% load factor
– exceptionally successful from a fare perspective. Our fares were 37% lower than Transat’s on average. And [we] introduced London to a lot of people that, within the Canadian marketplace, may not have been able to afford it, [before we entered that market].”
She continued: “Generally, when we go into a new market, we bring down airfares anywhere from 25% to 40% and what we typically see is that there’s some new demand that comes into that marketplace [as a result of that].”
By taking that approach, Clementino said WestJet has “liberated travel for Canadians,” allowing them to “go places where they want to go.”
The same could be said of WestJet’s 2022 plan because as it moves forward with its vision of “enriching the lives of everyone in its world,” it will also be presented with a broadening of the opportunities that vision can encompass.
“We like to say we are Authentically Canadian, Uniquely WestJet. That’s [because] we believe that there’s room in the world to be different and to be more Canadian and why that’s such a good thing,” she told CTP.
That’s why, Clementino says “We come back to that caring culture. We continue to focus on it because everybody keeps upping their game, and it’s going to get more challenging as we try to bring in more business travellers.”
On the corporate travel market, Clementino said: “We’ve done a lot of market research, and the number one expectation for the corporate traveller is the network and the schedule. We believe [that with] the strength of our domestic network, especially this year because we have strengthened it significantly, that we’ll bring the Canadian business traveller into our fold, and you’ll see more enhancements as the year progresses in that service delivery.”
WestJet Plus was certainly an investment that was designed to offer a reasonable and affordable premium economy level fare that would capture the attention of business travellers who want that servicing and space, and Clementino said that product will be “evolving over the course of the year.”
“It’s not business class, it’s premium economy, but it’s considerably less expensive than other premium economies in the market.”
As for where WestJet Encore fits into the scheme of things, Clementino told CTP that as “kind of the world’s fastest-growing operator of the Q400,” since its launch in 2013, the carrier now operates over 200 daily departures, and it started flying into North America in 2016, adding service to Boston and Nashville, and there’s more to come.
“That is going to be a huge part of our network growth on the Encore side because we’re getting to secondary and tertiary Canadian markets, such as Sudbury, such as Quebec City with the Q400,” she said.
And WestJet’s director of agency sales continued: “So, you’ll see more expansion. Encore will receive nine new planes this year, and they’ll continue to expand. In the markets where they go in, and where they haven’t been in before, we do see that spike that I was talking about with regards to demand. One: because it’s more affordable. And two: it’s that you have an alternative there that’s priced right, so people can justify flying versus driving.”
On WestJet Vacations, Clementino told CTP that 2016 marked the tour company’s “best year ever,” pointing out that while it has always had its dominant support in Western Canada, it had a very successful year in Eastern Canada, with Ontario posting the largest growth of any province.
Looking at 2017, she said: “We’ve forecasted increased sales over last year – which was exceptional – and so far, we’re on track. It’s a bit of a dog-eat-dog world right now, with the overcapacity [in the market].”
So where do travel agents fit in the plan?
Well, said Clementino: “We think of the travel trade as being an extension of our workforce. We look to them with the respect they deserve and continue to try and make it easier for them to do business with us and enhance the experience for their client and our guest. And we thank them for their business.”