Where there’s no such thing as the summertime blues 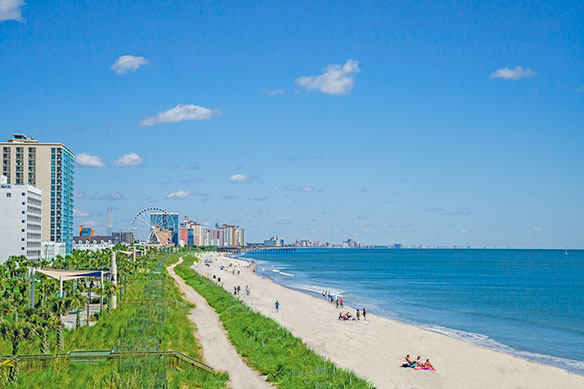 Myrtle Beach, South Carolina, has found a cure for the summertime blues when those blues are brought on by the approaching end of that season.
The oceanside destination has been promoting what it calls 60 more days of summer, a promotion that extends the summer season through October, still a very pleasant time of year there, says Julie Ellis, spokeswoman for the Myrtle Beach Area Chamber of Commerce.
“The water is still warm, the crowds are thin and the temperatures are still very warm,” she says of September and October.
Furthermore, hotel rates are lower in September and October than they are in July and August, Myrtle Beach’s peak months.
The destination has been focusing on millennial families, among other things having photographers patrol beach and so being on hand to capture images of the likes of young children placing their toes in ocean water for the first time.

Food, glorious food
Kimberly Hartley, Myrtle Beach’s Canadian representative, said Myrtle Beach’s “culinary scene is exploding,” with the destination now having 1,800 restaurants.
Another development is the Ripley’s Aquarium now having a Pearl Harbor exhibition that features memorabilia from the actual attack, a pivotal moment in The Second World War.
As well, authorities decided to extend the boardwalk from 1.2 to 1.4 miles, and add what Hartley calls a “huge entertainment complex” that features a Tin Roof, with Tin Roof being part of a Nashville-based chain that features live music.
The Myrtle Beach area is now home to seven live theatres that include a Medieval Times.

More than the beach
Meanwhile, Hartley says Myrtle Beach lies on “100 kms of beautiful beach” and outdoorsy sorts exploring the area can find hiking and cycling trails, and also enjoy the likes of kayaking and canoeing, bird-watching and dolphin cruises. “It’s not just about beaches and golf.”
Canadians who visit during the January-April period may find discounts of up to 55% from tourism businesses, she continued.
More information can be found at VisitMyrtleBeach.com .