Who is the Mad Trapper?

Something to speculate about on Tundra North Tours’ trip 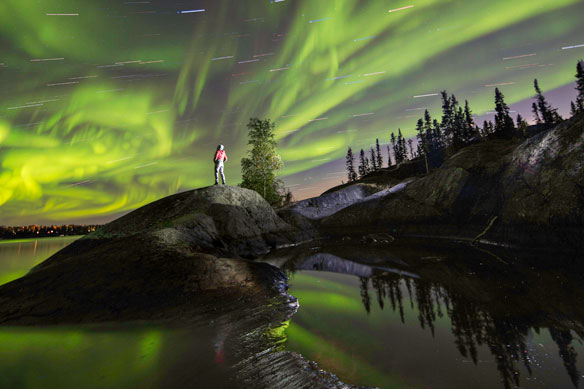 Inuvik-based Tundra North Tours is inviting visitors to the Arctic community to view an area grave that enables them to reflect on a great unsolved Northern mystery – just who was the reclusive man newspapers dubbed the Mad Trapper of Rat River while he led the RCMP on a bloody seven-week-long pursuit that ended with him defiantly fighting to the death in a remote part of the Yukon?

Tundra North Tours’ winter offerings include visits to the tree-side grave, in the small Mackenzie Delta community of Aklavik, of the man known as Albert Johnson during his brief time in the area nearly 90 years ago, with Johnson’s unclaimed body being buried there after he was killed by a pursuing RCMP posse following an initial Christmas-time standoff at the cabin he built on the Rat River — found southwest of what is now Inuvik – in the summer of 1931.

The initial shooting and seriously wounding of a Mountie at the cabin led to a 240-kilometer pursuit across bitterly cold Arctic terrain in the height of winter, with Johnson then killing one Mountie and wounding a member of the military who took part in the hunt before being killed himself.

The siege at his cabin – which at one point saw the RCMP trying to force him out with dynamite — was followed by Johnson managing to slip away after most RCMP officers returned to Aklavik to resupply after failing to convince him to surrender and being held at bay by Johnson’s shooting at them through smallish holes at the baseline of his cabin.

Johnson had earlier shot RCMP officer Alfred King, who wanted to speak to him about his failure to get a needed licence for his trapline.

After stealthily fleeing his cabin in darkness, Johnson led a posse consisting of RCMP officers and other recruits on a long and winding chase, gradually working his way westward – at times wearing his snowshoes backwards to confuse those tracking him – and then crossing the rugged Richardson Mountains, which separate the northern Northwest Territories from the northern Yukon, before finally being cornered and killed on Feb. 17, 1932, on the Eagle River in the Yukon.

Johnson – who never said a word from the time he shot King through the door of his cabin, after King knocked on it, through to his death in the Yukon – spurned all calls from the RCMP to surrender on the Eagle, continuing to return fire even after being shot multiple times.

His death brought an end to what some newspapers were calling the “Arctic Circle War.” 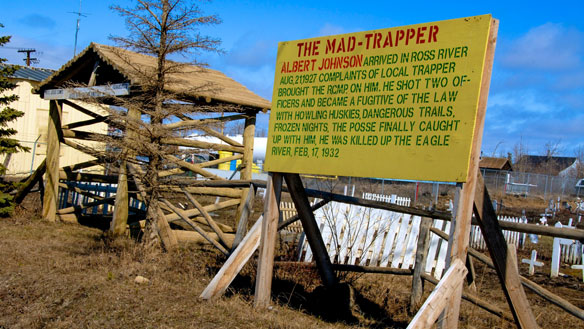 Johnson’s death picture showed a terrible grimace, one that Northerners said resulted from defiance but more probably was brought on by excruciating pain after he was repeatedly hit by gunfire.

The chase was also made notable by the RCMP recruiting famed bush pilot Wop May to follow Johnson’s snowshoe tracks from the air and using his ski-equipped plane to resupply the posse, which was travelling by dog-sled. It marked the first time the RCMP used a plane in a manhunt, and, in an interesting twist, the engineer who serviced May’s plane was a relative of Tundra North Tours’ Kylik Kisoun Taylor, while another Kisoun Taylor relative was involved in the ground hunt.

After his death, the RCMP received letters from people around the world claiming to be related to Johnson, all of which were discounted, with Johnson literally taking his true identity to his grave.

Kisoun Taylor – who has seen Johnson’s modest grave and flown over the remote Rat River – says it’s doubtful that Johnson’s actual identity will ever be known at this point, with Johnson’s rampage now well in the past, and he says that may be just as well.

“It’s a more interesting story if it’s loose-ended,” he says. “It’s all the unknowns that are keeping it alive. I love the North being mysterious.”

Kisoun Taylor has been working with an Austrian company interested in making a movie about Johnson, a project now on hold because of the coronavirus pandemic.

An earlier Johnson movie – Death Hunt, which starred Lee Marvin, Charles Bronson and Carl Weathers – was denounced by historians for inaccuracies, among other things having Johnson surviving and escaping.

2009 saw Johnson’s remains exhumed and then reinterred in an unsuccessful bid to identify him through DNA, with the Discovery Channel devoting a show to that effort. An uncle of Kisoun Taylor’s was involved in that project.

Kisoun Taylor says it’s difficult to tell whether Johnson – who came to the attention of authorities for a minor offence – was a rebel refusing to abide by laws or simply a “maniac.”

But Kisoun Taylor does marvel at the endurance of a man who was able to keep moving at a brisk pace while carrying a backpack and going long periods in extreme cold – wary of building camp fires because the smoke might give his location away – with little rest or food, losing what a coroner speculated was at least 25 pounds off a 5-foot-nine-inch frame while doing so. Johnson had a dead squirrel and a dead small bird in his pack when killed, his apparent next meal.

Crossing the Richardsons alone, with no vegetation needed to build a fire and facing strong winds in temperatures that were dropping to -40, would have been a challenge for a seasoned climber, Kisoun Taylor adds. “At 40 below, a hill is a mountain.”

Kisoun Taylor says Johnson had the “whole world’s attention” when he was on the run but memories of him have faded, with many young residents of Inuvik – home to a long-standing bar called The Mad Trapper – now being unfamiliar with his story.

He hopes that if the Austrian firm’s movie goes ahead, it will rekindle interest in Johnson.

And he also hopes that it would be historically accurate, recalling his own father’s annoyed reaction to seeing Johnson ultimately getting away in Death Hunt.

“He was throwing stuff at the TV and saying, ‘He didn’t get away. We got him.,’” Kisoun Taylor reports.