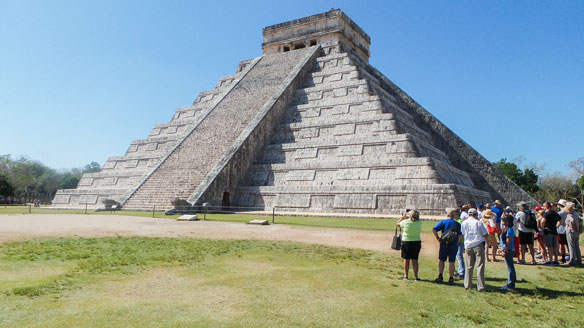 Pictured above: The massive temple of El Castillo is the iconic feature of Chichen Itza.

Rosa Elena Vermont Ricalde wants to dispel any confusion Canadians may have over her Mexican state and resort destinations on Mexico’s Caribbean coast.
Vermont Ricalde, with the state’s tourist board, notes the state of Yucatan makes up part of the Yucatan Peninsula, as does the state of Quintana Roo, home to hugely popular Cancun and the Riviera Maya.
“I know many when they hear Yucatan they think of Cancun and the Riviera Maya,” she told a Toronto gathering.
Vermont Ricalde said the state of Yucatan has numerous tourist draws, among them the archeological site of Chichen Itza, which attracts large numbers of day visitors from Cancun and the Riviera Maya.
Yucatan’s having many archeological sites and other reminders of the Maya civilization makes it the “heart of the Mundo Maya [Maya World],” she stated.
Vermont Ricalde also noted that Spanish colonial influences can be found in such cities as Merida, dubbed the “White City” because many of its structures were built with white stone; Izamal; and Valladolid.
Merida has French architectural influences as well.
Yucatan also has many haciendas and cenotes, the latter being the underground water bodies that are common in the river-free Yucatan Peninsula and many of which can be entered by tourists.
Gulf of Mexico-fronting Celestun is known for the many birds found in the area, including bright pink flamingos.
Among Merida-area resorts is Chable Resort & Spa, a member of Small Luxury Hotels of the World, with Chable’s Karina Fuentes telling the audience that the new property is “one of the most luxurious hotels in Mexico” and won UNESCO’s Prix Versailles award for an outstanding hotel.
Chable is found in the “middle of jungle,” and the 740-acre retreat sees guest units surround a long-standing one-time hacienda that’s now part of the resort, she reported.
One of its restaurants has 3,500 bottles of tequila, in effect making it a “tequila museum,” she continued.
Kim Barbisan of WestJet in turn told the gathering that WestJet will again be linking Toronto and Merida, with this winter’s service running every Tuesday from Dec. 5 to April 24.
WestJet clients can go the air-only route, while WestJet Vacations has four hotels in the area, three EP hotels – including a Hyatt – in Merida and an all-inclusive property on the nearby Gulf of Mexico coast.
Meanwhile, Cesar Mendoza of the Mexico Tourism Board said his homeland hosted 34.9 million visitors last year, up 9% from the previous year. Authorities are hoping 37.6 million will visit the world’s eighth-most visited country this year.
Last year saw 1.8 million Canadians visit Mexico, and the tourism board is hoping for a 9% increase this year, with Mendoza reporting winter will see air service from 25 cities in this country to 13 Mexican destinations.