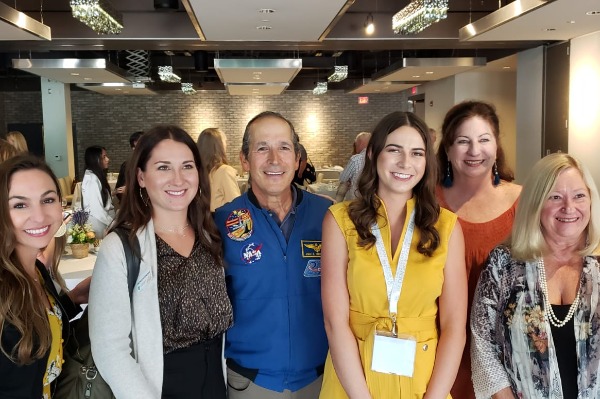 The former NASA astronaut was the guest speaker at a Thursday (Sept. 15) Toronto Discover America Canada event, recounting travelling upwards in an incredibly dramatic fashion to the International Space Station on a 13-day Space Shuttle Endeavour mission in 2002.

Herrington’s talk was marked by dramatic images of the International Space Station and the Earth taken from Space, including a New Zealand channel that British explorer Captain Cook centuries ago sailed through on his vessel the Endeavour, which Space Shuttle Endeavour was named after.

But Herrington also mentioned his journey to become an astronaut wasn’t always easy, recalling how he was asked to leave university at one point because his love for rock climbing was cutting in on his studies, something reflected in low grades.

“How do you become an astronaut after getting kicked out of college?” Herrington asked his audience.

Well the ambitious Herrington did just that, as well as earn a PhD, become an U.S. Navy officer, cycle across the United States, and write a children’s book, four of many accomplishments in a life filled with remarkable accomplishments.

Herrington also appears in the new movie Into Nature’s Wild, narrated by actor Morgan Freeman and a showcase for American nature.

Herrington, a member of the Chickasaw Nation in Oklahoma, was also the first Indigenous astronaut, and proudly serves as a role model for Indigenous children. He took an eagle feather and other reminders of his heritage into the heavens on a voyage that had him orbit this planet in around 90 minutes.

The feather and other items are now displayed in the Smithsonian Institute in Washington.

Only a select few will ever become astronauts but Herrington told his audience that they can certainly explore our world: “We are all on a journey.”

Meanwhile, a man who has reached remarkable heights urged audience members to be kind to Mother Earth, saying they need to think of what kind of a world they will leave for their children.

“We have to take care of it (the planet),” said a man best known for Space exploration. “Our future is really on the Earth.”

The audience was also told by Raina Williams of Expedia’s Canadian operation that people are looking to travel, even though travel costs are on the upswing.

There’s a “strong demand in Canada for international travel,” with the United States the preferred out-of-country destination, she said

“We’re excited to see how many Canadians are starting to make their way south of the border,” Williams added.