Home › Destinations › Discover the Origins of Halloween – in Ireland!

Discover the Origins of Halloween – in Ireland!

Halloween is Ireland’s Most Ancient Festival 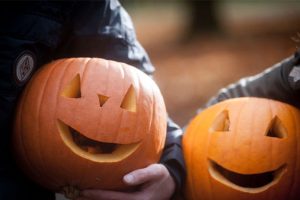 Halloween is Ireland’s most ancient festival, a potent potion of pagan and Christian meanings, lore and legend.

The earliest form was “Samhain,” an end-of-summer festival often known as the Celtic New Year that marked the end of the summer and the harvest and the beginning of the long winter nights. Bonfires were lit, often to provide light for those bringing in livestock from the fields or mountains to be slaughtered for winter. On this day, the Celts believe that the door to the underworld was opened, letting in spirits. They would hold a feast, setting a place for any deceased relatives, as they were believed to visit during this time. Mean spirits entered the earthly realm as well. People would dress in costume in order to confuse these spirits and to scare evil away. The morphing of Samhain into Halloween came about in the 7th century, when Christianity declared All Saints’ Day or All-hallows for Nov. 1. This made the night before it All-hallows Eve, or, Halloween.

Named Best Halloween destination in the world by USA Today, beating off competition from infamous spooky locations Transylvania, Sleepy Hollow and Salem, Massachusetts. Learn more about the festival at https://www.youtube.com/watchv=tuPlr01jtm0&feature=youtu.be.

First came the turnip, followed by the pumpkin

Did you know that turnip lanterns predate pumpkins? Turnip carving for Halloween originated in Ireland when turnips were traditionally used to create jack-o’-lanterns for the festival. When Irish immigrants moved west they brought the tradition with them and began to use pumpkins instead of turnips for celebrations in North America. A local craftsperson will demonstrate how we use turnips to create jack-o’-lanterns in the original way.

A Banshee is a female spirit in Ireland who will wail outside a home to warn of an imminent death of a family member. Her wails are high-pitched and terrifying that nobody will dare to attempt to see her. Banshee (bean-sidhe) means “Faerie woman” or “woman of the Faerie mound.” Many legends exist surrounding the Banshees and just how evil is she meant to be.

Tales of vampires and other similar blood-sucking creatures have been told in various societies across the world. The most famous of these tales is the story of Dracula, written by Bram Stoker, and published in 1897. This Gothic horror novel tells of Count Dracula’s attempt to move from Transylvania to England in order to seek new blood and spread the undead curse. Hoping to prevent the Count from succeeding in his quest is a small group of men and women led by Dracula’s archenemy, Professor Abraham van Helsing. It has been popularly speculated that the character of Dracula is based on Vlad the Impaler, the 15 th century Prince of Wallachia. Nevertheless, there are those who believe that it was Irish folklore, rather than Romanian history that inspired Stoker’s Dracula.

Caution is required at this time of year when biting into a slice of warm barmbrack. This traditional Halloween bread/cake could contain any number of items, ready to tell the future of the person lucky (or unlucky) enough to find something in their slice. Within your slice of brack you may find: a ring (married in a year); a stick (a walking stick indicating future travels); a thimble (a spinster forever); a button (a bachelor forever); a coin (a lifetime of wealth); and a piece of cloth (a lifetime of poverty). Years ago, religious medals could also be found in bracks, predicting a life in the Holy Orders.

Traditionally in Ireland, many believed that colcannon could be the key to success for single women seeking a husband. Varying versions of this mashed potato dish passed through generations seeing rings (marriage), thimbles (spinsterhood), and coins (wealth) added to the finished recipe. One legend has it that unmarried women would put the first and last spoonful of their colcannon into a sock and hang it on the door. The first man that passed through the door would then be their husband. Others say unmarried women would go blindfolded into their garden to handpick the cabbage they would use for their colcannon. A batch of colcannon would be made with the chosen cabbage and a ring would be added. The woman who was first to find the ring in their portion would also be the first to marry.