Marvel At Its Culture, Nature, Gastronomy, Wine And Its People 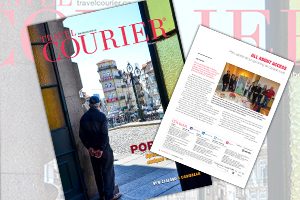 If you ask Ana Mendes Godinho why Portugal is such a hot destination, she’ll smile and politely tell you the following:

Mendes Godinho, who is Portugal’s minister of tourism, explains that today, her country is considered a case study in Europe having survived “a serious [economic] crisis” in the period between 2011 and 2014 – when unemployment reached 17% in 2013 – to turning its economy around completely in just two years, reports executive editor, Bob Mowat in this week’s digital edition of Travel Courier.

“We are growing at almost a 3% rate – one of the fastest growing economies right now in Europe. Our unemployment rate has lowered to 8.8%,” Mendes Godinho said during a recent conversation with Travel Courier.

That turnaround came as the result of shift in political strategy that moved away from an austerity model to one that used significant private and public investment to stimulate the economy.

The strategy worked, and Mendes Godinho observed that: “Tourism did have a lot to do with this. Right now, I would say Portugal is the country in Europe where tourism is growing more in terms of receipts. It’s [receipts are] growing at 20% this year and the number of tourists is growing at 10%.”

And that, said the tourism minister “means that we are getting much more value and a much more sophisticated market.”