Diverse India Has ‘Changed Many Lives’ 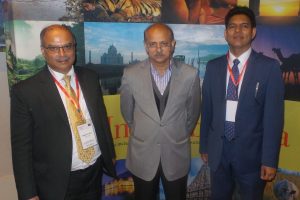 Sidharth Bodwal says his homeland clearly has plenty of experience at hosting visitors.

Bodwal, with India Tourism Toronto’s office, told a Tuesday Toronto gathering that India “is a country that has attracted and mesmerized travellers since time immemorial,” with the holy city of Varanasi, for instance, having “changed many lives.”

Bodwal added that some 73% of Himalayan peaks are found within northern India, while southern India is home to “some very beautiful beaches.”

Adventure seekers can go skiing in the Himalayas, whitewater rafting on the Ganges River, opt for camel safaris in Rajasthan or seek exotic wildlife, such as one-horned rhinos in northeastern India.
Many associate Indian wildlife with tigers, but Bodwal noted that the Indian state of Gujarat has a sanctuary for lions that are “no less majestic than their African counterparts.”

Bodwal also told the gathering that “India has emerged as a global health care destination” and those interested in their well-being can practice yoga in the country in which it originated.
Those on hand for the event were also told that Air India now serves 71 destinations in 23 countries and has 117 planes, including the Dreamliner.