Home › News › The Diversity and Duality of Tahiti

The Diversity and Duality of Tahiti 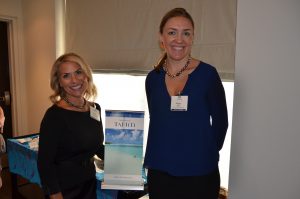 Beyond the iconic shots of Bora Bora, the diversity and duality of French Polynesia was on display last night (Aug. 30) as the Tahiti Tourisme North America reception series stopped in Toronto.

The annual trade event, which includes Canadian dates in Montreal, Calgary and Vancouver, highlighted the vast offerings of The Islands of Tahiti’s five archipelagos and 118 islands and atolls, and provided travel agents with an overview of the many activities, hotel, resort, pension and cruise options, as well as the Tahiti Tiare Program, the travel agent certification program offered by Tahiti Tourisme North America, and the ongoing tourism campaign, Embraced by Mana.

“Although the iconic shot of Mount Otemanu is what clients come to you for, we’d like to show you the diversity and duality of the destination,” says Kristin Carlson Kemper, director of marketing for Tahiti Tourisme North America.

From Fakarava, “everyone’s favourite atoll to say,” to the world’s only coral wines, Carlson Kemper says the birthplace of the overwater bungalow has a lot to offer clients. Located between California and Australia — an eight hour flight from LAX — she says the South Pacific destination is closer than people think, and there are no visa requirements for Canadians who stay under 90 days. While Tahiti is frequently associated with romance, she says there are many family-friendly hotel options as well.

“There are more rooms at the MGM Grand Las Vegas than in all of French Polynesia,” she says, adding the destination receives the same amount of visitors in one year as Hawaii does in seven days.

Pictured at the event are Carlson Kemper and Kelley Tekura, trade and promotions manager at Tahiti Tourisme.