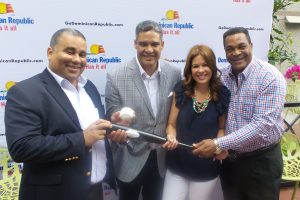 The Dominican Republic Tourism Board brought out a heavy hitter in Toronto last night (July 11) evening to promote Dominican tourism.

A tourism board gathering saw longtime Blue Jay and fan favourite George Bell on hand to both tout the benefits of vacationing in his native D.R. and reminisce about his time in Toronto.

“We like to see Canadians come to the Dominican,” Bell told the gathering, suggesting that they consider visiting the “beautiful” capital of Santo Domingo – part of which dates back centuries and features Spanish colonial architecture – along with the country’s many beach resorts.

“We’re going to give [tourists] a nice welcome,” the now-retired Bell promised, adding revisiting Toronto was “bringing a lot of memories” for him and he hoped his tenure in the Ontario capital enabled Canadians and Dominicans to “tie the knot a little bit more.”

Bell – inducted into the Canadian Baseball Hall of Fame in 2013 – was in turn praised by Abdallah Castillo, Canadian director for the tourism board, as a “true baseball legend” who is both a “former proud Torontonian” and a “great ambassador” for the D.R., where baseball is a “national obsession.”

Tourism authorities note that baseball is widely played in the Dominican Republic, which routinely sends players to the major leagues, and suggest that baseball fans vacationing in the country take in a local game during their holiday.

Castillo also used the event to report that the past year has seen a record number of Canadians visit the Dominican Republic. Around a million have visited the tropical country in the past 12 months.

“We have lots of new developments in our country to share with you – new roads and infrastructure improvements, new cruise facilities, new hotels and better air lift.”

Castillo said that those visiting his homeland can enjoy its food, music, with the likes of merengue being among Dominican musical expressions, and “the fantastic love of life” found among Dominicans.

Pictured at the event are Guillermo Estrella, the D.R.’s consul-general in Toronto, Castillo, Yadira Gomez of the tourism board’s Toronto office and Bell.
(http://www.godominicanrepublic.com)