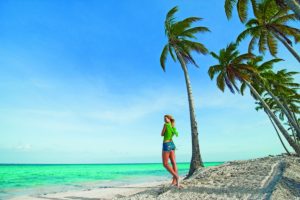 The Dominican Republic, Montreal Canadiens and Air Canada Vacations (ACV) along with the Grand Bahia Principe have teamed up to give hockey fans a chance to win a one-week, all-inclusive trip for two to Punta Cana with a prize draw during tonight’s (Feb. 28) Canadiens game at the Bell Centre.

During the first period of the game, contest organizers will select a random seat number in the Bell Centre. If the person sitting in the selected seat is an adult, they will join four other finalists (who were selected randomly as part of an online contest on the Canadiens’ website) and be invited to attend the grand prize live draw in the second period, where one hockey-loving winner will be awarded a round-trip economy class flight for two adults on Air Canada Rouge to Punta Cana from Montreal, seven nights, double occupancy, at the Grand Bahia Principe Resort Hotel in Punta Cana and transfers.

In celebration of the contest, Bell Centre will be outfitted in Dominican Republic flair, with an information kiosk, virtual reality experience and live entertainment.