Coalition Pushing A Plan With Benefits 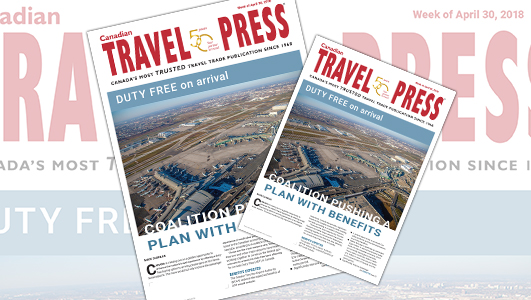 Canada is missing out on a golden opportunity to enhance the nation’s travel experience by offering a duty-free buying option to arriving passengers at its international airports.
The move would not only improve the passenger experience, it would also provide a significant boost to the Canadian economy while creating new jobs, according to a coalition of airports, reports Quebec editor, Mike Dunbar in this week’s digital edition of Canadian Travel Press.

Those are the main reasons why Toronto Pearson and other major airports have been working together to convince the federal government to amend its duty-free laws allowing for Arrivals Duty-Free (ADF) in Canada.

The Greater Toronto Airport Authority (GTAA) reckons the expected benefits of ADF would include:

Mike Ross, the GTAA’s director of commercial and passenger development, revealed that ADF talks have been ongoing since before 2011 and is still part of the coalition’s agenda although he added, “It would naïve to think we could set a target date.”