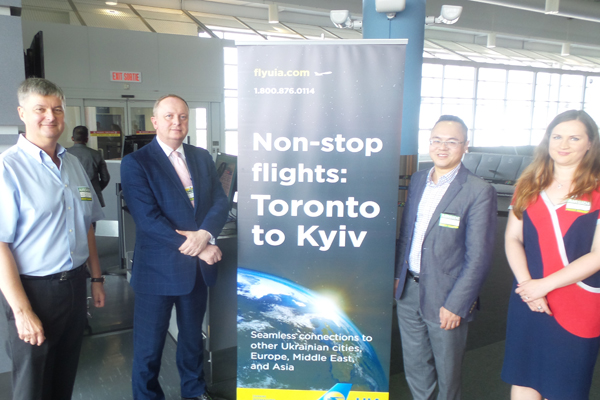 Ukraine International Airlines says its first year of serving Toronto has been a success, a sentiment echoed by some of the tour operators it works with.

A Wednesday celebration at Toronto’s Pearson International Airport saw Karl Muller of Airline pros, which works with Ukraine International Airlines, tell the audience that the carrier decided to switch planes from a B767 to the larger B777 on its Toronto-Kiev this summer to accommodate demand.

“It’s truly been a dynamic 12-month period…,” he said. “We’d like to thank all our friends and supporters from the travel industry and the community.”

Muller said load occupancy on the route – which has averaged over 90% – has been been higher than expected, something he attributed to “accessible price and a vast network” offered by the airline.

About 35% to 40% of those travelling from Toronto to Kiev are bound for Ukraine while the rest are continuing on, taking advantage of what Muller said are the “seamless connections” UIA offers in Kiev.

Airline clients have been continuing to such cities as Delhi, Dubai, Warsaw, Istanbul and Amman.

UIA now has four-times-a-week summer service on its Toronto-Kiev route. The airline plans to reintroduce the B767 on the route in the fall, although Muller said that will probably be the last time it serves Toronto.

UIA has interline agreements with both Air Canada and WestJet.

Meanwhile, Harold Ho of Royal Scenic labelled UIA a “really good” product for those bound for Eastern Europe, India and the Middle East.

He praised both its business and economy classes and said UIA is “up to a modern standard.”

He also lauded its on-time performance.