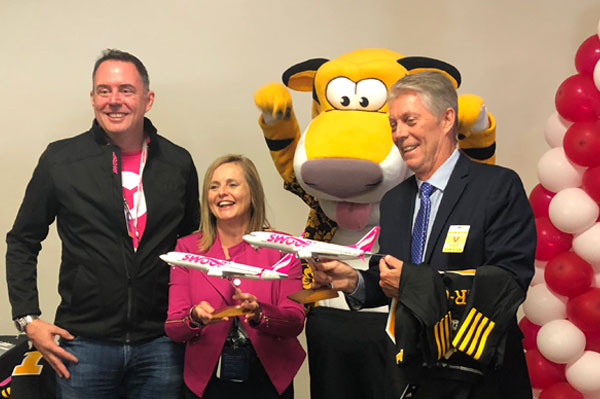 Steven Greenway, president and CEO of Swoop, observed: “Our dedicated team of Swoopsters have worked tremendously hard to deliver exactly what we set out to. Today marks an important milestone for Swoop, and is equally as meaningful for Canadian travellers.”

And Greenway added: “We’ll be progressively rolling out new routes and destinations in the coming months and years to come.”

The low cost carrier, a subsidiary of Westjet, was cleared for take off at 5:45 am this morning for the five hour flight, with an average fare of $100. The first 737-800 aircraft with 189 seats has been named #Hamilton.

Greenway stated that the company’s mission statement is to make travel easy, accessible and affordable.

Travellers can expect a travel experience catered to them as extras such as a carry on bag, checked baggage, and buy on board are additional.

Hamilton airport is clearly excited to welcome Swoop with its lower fees offering a lower overall operating cost for Swoop.

Four aircraft will be based in YHM with 200 Swoop staff. The Swoop fleet will grow to 6 aircraft by the end of the year and 10 aircraft in 2019.

Puckering said: “We are thrilled to celebrate the official launch of Swoop as its very first flight departs from Hamilton International. By providing economical and efficient services at Hamilton International, we are a low-cost gateway and a perfect fit for Swoop as their base in Eastern Canada. We are very proud to have one of the first aircraft named #Hamilton and to inaugurate Swoop’s first flight today. We look forward to a strong partnership celebrating many more milestones together.”

Hamilton is the fastest growing airport in Canada with 600,000 passengers last year.

YHM also boasts that within 120 minute catchment there are 9.3 million people.