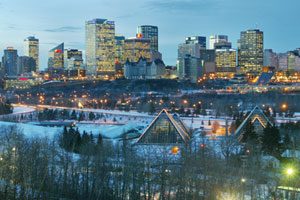 Canada is a popular travel destination and according to Hotels.com’s 2016 Hotel Price Index (HPI) Edmonton is trending as one of the country’s hot spots.

The 2016 HPI listed Edmonton as the third most popular destination for Canadians, just behind Toronto and Montreal. The city has been gaining popularity over the last few years – in 2013 it was ranked #5 in the HPI. However, average hotel prices in the province haven’t caught up with its stellar reputation, so the city offers a lot in value. While Toronto and Montreal averaged nightly hotel prices at $167 in 2016, Edmonton’s average price was $129, a 6% drop from 2015.

Ten per cent more Americans visited Canada in 2016 compared to 2015 and with Lonely Planet naming Canada the top destination to visit in 2017 this trend may hold strong throughout the year.

Canadians are also being encouraged to explore all the country has to offer, especially as it celebrates its sesquicentennial.

As the fifth largest city in Canada, Edmonton has a lot to offer.