Empowering Women Through Travel And Tourism 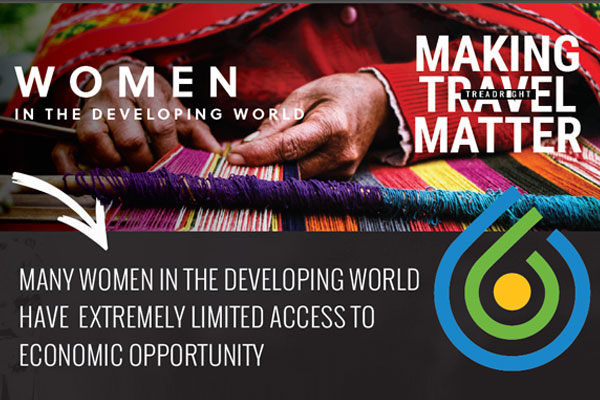 The TreadRight Foundation has unveiled a new study, released ahead of International Women’s Day, that explores the potential power the travel and tourism industry can have to help forge a positive and empowered future for women in the developing world.

The artisan industry, which includes those who craft souvenirs that clients purchase while abroad, is one of the few tangible opportunities many women in developing countries have to participate in the economy.

According to UN Women – http://www.unwomen.org/en/what-we-do/economic-empowerment/facts-and-figures – over “2.7 billion women globally are legally restricted from having the same choice of jobs as men. Of 189 economies assessed in 2018, 104 economies still have laws preventing women from working in specific jobs.”

In the same report, UN Women note that women “remain less likely to participate in the labour market than men around the world. Labour force participation rate for women aged 25-54 is 63% compared to 94% for men.”

The TreadRight Foundation’s new study shows that despite the fact that the artisan sector generates $32 billion a year and ranks as the second largest sector of rural employment after agriculture in most developing nations, only one-third of the businesses worldwide are owned by women. Even though women make up over half of the world’s population.

TreadRight’s research also notes that the 33% of women who own their formal businesses have less, or zero, access to financial services, markets and property. The UN Women’s study also backs this figure, citing that “women are less likely than men to have access to financial institutions or have a bank account. While 65% of men report having an account at a formal financial institution, only 58% of women do worldwide.”

The research concludes that when the travel industry supports artisans in the places they send travellers to, it is an important step in helping to reduce poverty, champion gender equality, and promote productive employment.

In 2015, the United Nations adopted a shared blueprint for peace and prosperity for people and the planet. At its heart are the 17 Sustainable Development Goals (SDGs), which are an urgent call for action by all countries – developed and developing – in a global partnership.

Right to the heart

When women are empowered economically, they invest in their families and communities, spurring economic growth and creating more stable societies. In fact, promoting women’s economic participation, especially in developing countries, could boost global economic growth by $12 trillion by 2025.

The TreadRight Foundation, along with The Travel Corporation’s family of brands such as Insight Vacations, Trafalgar, Luxury Gold and Contiki, have made empowering women a central part of its “People” pillar – which is to encourage the cultures, traditions and arts of the communities they visit to thrive.

The foundation and TTC’s travel brands seek to enable these communities to see the true benefit from tourism through economic empowerment. One prime example of this in action is through offering clients an opportunity to be part of the solution. Brands such as Insight Vacations, Luxury Gold, Trafalgar and Contiki have integrated women’s cooperative projects from around the world in which they support into their itineraries, allowing clients not only to learn directly from the locals, oftentimes indigenous women, but to also offer them the opportunity to purchase items made by the same women as a way to support their businesses.

The TreadRight Foundation’s report concludes with one simple tip for travel advisors and their clients: buy local and make your travel matter.