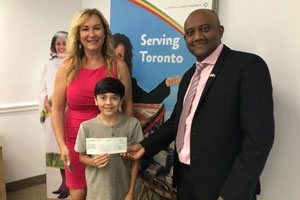 The winners of the Ethiopian Airlines Canada 150 contest had more than just winning on their minds.

Aaron and Jamie Collard wanted to thank their supporters by doing something special for the local community.

They gave a donation and promoted the work of the Stedman Hospice. Ethiopian Airlines Canada and RadonicRodgers Strategy+ were impressed with the initiative and Aaron was presented with a $500 donation to Stedman Hospice as way to share in the spirit of goodwill.

“We were impressed how Aaron engaged with his community and showed his generosity through his efforts,” said Birhan Abate, country manager Ethiopian Airlines, Canada.

“We wanted to help Aaron with his efforts and made the donation to help his local community” Aaron, a 12-year-old from Burford, Ont., was recently announced as the grand prize winner of Ethiopian Airlines Canada “Canada 150” contest. Ethiopian Airlines Canada hosted the contest on its Facebook page – @EthiopianAirlinesCanada to mark Canada’s sesquicentennial. People were asked to upload a video describing what they “Love about Canada.”

The top five finalists were selected by the airline as the finalists received thousands of likes and shares during the duration of the contest.

During the duration of the contest Aaron was active in his community and gained local media coverage. He made additional videos, which he posted online, sharing how he wanted to thank his online supporters by donating to Stedman hospice.

For more on Ethiopian Airlines, go to http://wwwethiopianairlines.ca .

Seen in the photo, from l to r, are Gordana Mosher, RadonicRodgers; Aaron; and Birhan Abate, Canada country manager for Ethiopian Airlines.