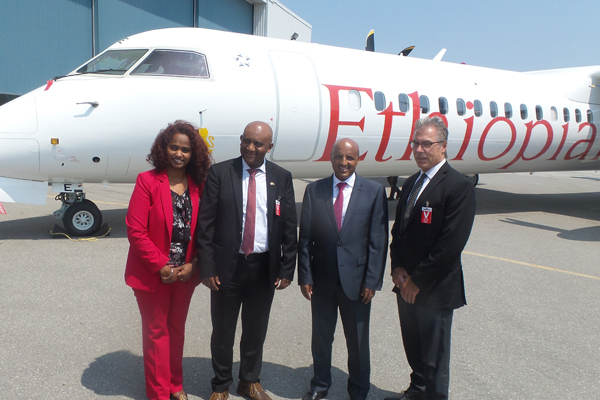 Ethiopian Airlines bolstered its fleet Friday, taking delivery of its 25th De Havilland Dash 8-400 aircraft, a plane that the carrier’s CEO lavished praise on during a Toronto ceremony.

Tewolde GebreMariam told a gathering at the De Havilland plant that the Dash 8-400 is “highly capable, especially in high altitude and hot temperatures.”

Performing well in high altitudes is a plus when flying into and out of lofty Addis Ababa, he continued.

“We are a very happy customer… Keep building this great airplane and we’ll keep flying it,” GebreMariam said.

GebreMariam said Ethiopian Airlines, which counts Toronto-Addis Ababa among its routes, is “by far the largest” airline in Africa and serves more than 120 international destinations.

The Star Alliance carrier has seen extremely rapid growth in the past decade, he continued.

Young added the airline has seen “dramatic growth” throughout Africa.