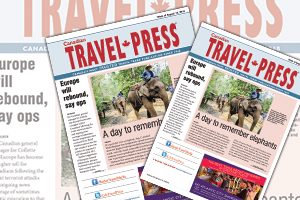 The Canadian general manager for Collette says Europe has become a tougher sell for Canadians following the recent of terrorist attacks and ongoing news coverage of sometimes chaotic migration to that continent from Third World countries over the past couple of years but predicts its popularity will rebound in 2017, reports Ian Stalker in this week’s digital edition of Canadian Travel Press.

Further suggestions of European turmoil followed the decision by British voters to have their country leave the European Union.

Collette plans to release its 2017 Europe brochure shortly, which will have new products for clients, something Walker said underscores the confidence Collette has in the continent.

“I think most companies are optimistic, if not very optimistic, that 2017 is going to be very good,” he said.

Walker said that recent high-profile terrorist attacks in different parts of Europe have undoubtably made some Canadians nervous about visiting it. But he added that our low dollar and a sluggish Alberta economy have likely also been damaging.

“Europe is a very important part of our business. We’re not going to shirk away from it because of acts of terrorism,” he vowed.

Terror attacks do lead to downturns in visits to Europe but today’s travellers tend to get over their fears faster than they have in the past, he added.

Walker vowed that Collette will continue to stand by its European partners.

Patricia Fargeon of France specialist Planet France said the bloody attack in Nice lead to “lots of cancellations,” more so than the also deadly one earlier one in Paris.

Labour issues have also been damaging to French tourism this year, she added, speculating that French tourism will probably be a “little down at the end of the year.”

But she expects that France will rebound in 2017 if there are no further major issues.

“It [terrorism] can happen anywhere on the planet and they [travellers] should still visit France,” Fargeon said. “It’s a beautiful country.”

Fargeon suggested that those who are now nervous about visiting French cities should consider vacationing in the countryside, which she said provides a great vacation and is free of crowds terrorists tend to target.

She also suggested that visiting Europe during a time of concerns about terrorism sends a message to terrorists themselves. “In my opinion, you live your life and accomplish your dreams.”