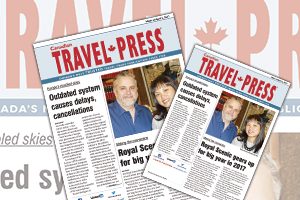 Air traffic controller (ATC) strikes – causing massive delays and thousands of cancellations — have become a Europe-wide phenomenon of late but those delays have paled into insignificance compared with the disruption caused by the continent’s air traffic management’s (ATM) inefficiencies, reports Quebec editor, Mike Dunbar in this week’s digital edition of Canadian Travel Press.

According to Pete Curran, IATA’s assistant ATM director, European passengers suffered more than 14 million minutes of delay in 2015; the bulk of which was due to the inefficiencies, with one million due to strike action and a further 300,000 minutes caused by ATM system failures.

To put that figure in perspective, Curran quipped that during 14 million minutes one could watch the original Star Wars trilogy 37,000 times or build five more of Dubai’s iconic Burj Khalifa skyscraper.

Curran said the Single European Sky (SES) solution to the problem was devised to reform the system but that was in 1999 and the SES is still blocked as member states, unwilling or unable to cede sovereignty over their skies, continue to drag their feet.

“The situation can be characterized as largely one of conflict and vested interest resulting in a lack of political willingness to make reforms, while key stakeholders are not convinced of the need to modernize and don’t pay the price for poor performance,” explained Curran.

That burden is squarely on the airlines, he pointed out, adding. “Operating in a fiercely competitive environment and funding the entire system, they seek the capacity, environmental, safety and cost-efficiency improvements that European airspace desperately needs.”