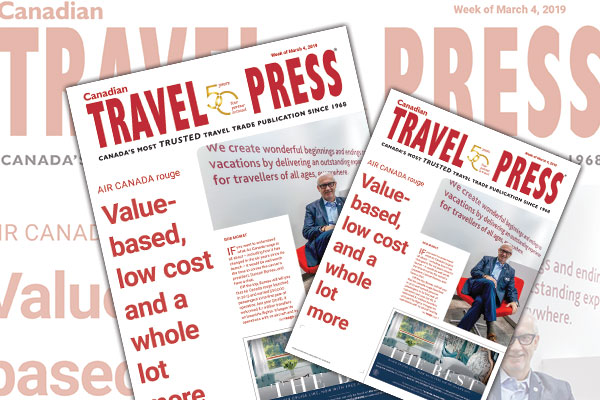 If you want to understand what Air Canada rouge is all about – including how it has changed in the six years since its launch – it would be well worth the time to corner the carrier’s president, Duncan Bureau and have a chat.

Off the top, Bureau will tell you that Air Canada rouge launched in 2013 and carried 300,000 passengers in its first year of operation; last year (2018), it welcomed 8.1 million travellers on board its flights. It began its operations with 10 aircraft and by the end of 2018, it had a fleet of 53 aircraft.

“Since inception,” Bureau told Canadian Travel Press, “we’ve carried 29.9 million passengers and our route network has grown significantly and we’re now operating in 100 different markets and the number of net new destinations that the Air Canada Group of Companies has benefited from is 41.”

Yet beyond the numbers, Bureau says that: “When you look at all of the destinations that we’re now operating on a non-stop basis with the Air Canada rouge brand, it has really created an opportunity for consumers to go to places on a direct flight. They’re no longer connecting over Europe to get to Bucharest or Budapest or some of these other second and third tier type markets.”

“Those are the kinds of markets we can serve with the Air Canada rouge brand and we do it on a seasonal basis and we do it very, very successfully. We move capacity in and out of Europe and in and out of the South into the Caribbean, into South America – our variable fleet strategy has worked extremely well for us.”

As for the fleet itself, Bureau said Air Canada rouge currently operates 28 narrow-body aircraft (both A319s and A321s) and is introducing A320s in the summer of 2019.

“What that does,” he explained, “is it introduces a new fleet type for us that we really like from its capacity capability and its payload capability and the overall economics. We’re very excited about adding that into our fleet type.”