Are You Ready For The Next Disruptor 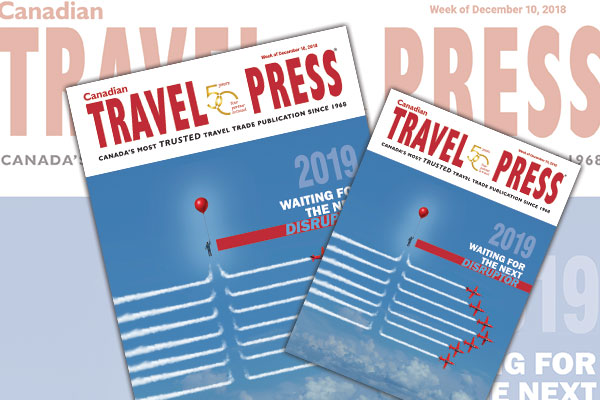 Is the glass half full or half empty?

Yet as the year winds down, there are some disturbing signals that raise concerns that all is not well – the turmoil in Alberta’s oil industry and the closing of GM’s Oshawa car plant are but two examples of such concerns.

Consider as well, recent comments by IATA’s director general, Alexandre de Juniac who observed: “The forces of economic protectionism are casting a shadow over world trade and, if the world proceeds on this `reverse globalization’ course, passenger numbers will still grow but more slowly – perhaps only by 2.4% annually.”

And Eric Barber, who authors The Hotel Insider column for CTP, writes in this issue: “Personally, I believe we have hit the tipping point in the country in terms of potential future growth, and this was going to slow down in 2019 as affordability becomes a major issue.”

Whether it’s economic turmoil, natural disaster, new and emerging technology, geopolitical upheaval or a combination of all of these forces, we live and work in a world that’s all about disruption – or change, if you wish – so for our annual Forecasting issue, Canadian Travel Press asked some of this country’s top travel executives to address the question of how you go about selling travel in a world of disruptors.

So read on and find out if you’re ready to meet the next disruptor – the story begins in this week’s digital edition of Canadian Travel Press.