GTAA Is On Course For A Bright Future 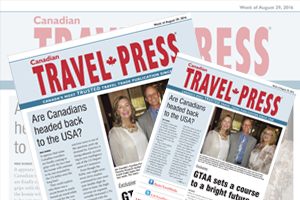 Make no mistake about it, Toronto Pearson Airport is on course for a bright future, reports Bob Mowat in this week’s digital edition of Canadian Travel Press.

During a luncheon at Toronto’s tony Boulevard Club hosted by Baxter Travel Media and the Greater Toronto Airports Authority (GTAA), a group of 40 or so senior airline industry executives had the opportunity to get the inside story on what’s new and what’s ahead for Toronto Pearson from the GTAA’s director aviation business development, John Sharp.

Sharp began by telling his audience that in the 1970s, Toronto Pearson served about 10 million passengers annually, however that traffic more than doubled – to around 21 million – by the 1990s.

By 2015, Toronto Pearson handled 41 million passengers, with Sharp pointing out that: “In 2015, our growth in overall passenger traffic was 6.4%. In 2016, we are on a similar high growth trajectory.”

As for how this growth benefits the Greater Toronto area and Ontario, Sharp pointed out that about 40,000 people work at Toronto Pearson, with an additional 245,000 people working in the surrounding area.

He continued: “One great example – and a distinctly Canadian one – of Toronto Pearson as a local economic enabler and an international connector of people, places and things would be our exports of Canadian lobster. In 2014, we exported nearly $80 million in live lobster coming from Canada’s east coast, with half of that amount going to China.”

For the full story, check out this week’s digital edition by clicking here.