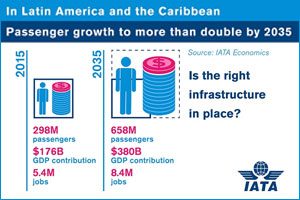 IATA is urging governments in Latin America and the Caribbean to work with industry to make infrastructure a priority in unlocking aviation’s economic and social benefits.

According to IATA, passenger demand in Latin America and the Caribbean is expected to more than double from 298 million in 2015 to 658 million in 2035.

The airline industry association said that if that demand is met, the number of jobs supported by aviation in the region will grow from 5.4 million to 8.4 million over the same period.

And aviation’s contribution to regional GDP will increase from $176 billion to $380 billion.

Alexandre de Juniac, director general and CEO for IATA, said that: “Aviation is the business of freedom. It helps people to trade, to discover and to better their lives. A successful aviation industry generates prosperity. Despite protectionist rhetoric — which we must be robust in countering — economies need air connectivity to grow and integrate with world markets.”

“Operational costs are high. Taxes are significant. In addition, regulations are burdensome and often not aligned with global standards. We need a strong partnership with governments that focuses on unlocking aviation’s benefits to tackle these issues effectively. On top of that, in Latin America there is a huge opportunity for a government-industry partnership to create value by addressing the region’s many infrastructure deficiencies,” IATA’s boss stated.

He pointed to the severe capacity constraints in Bogotá, Lima and Mexico City as illustrating the region’s airport capacity crunch.

And although there are plans are in place to address these issues, that relief is years away at best. In the meantime, there will be lost opportunities for jobs and economic growth.

“The key is consultation,” said de Juniac. “Airlines, governments and airport operators need to be partners in building successful cost-efficient infrastructure in line with market realities on cost and capacity.”

However, de Juniac sounded a cautionary note on airport privatization, pointing out that: “Harnessing the efficiencies of private enterprise to improve infrastructure needs iron-clad regulation to protect the users from out-of-control monopolies.”

And he also urged governments to award infrastructure concessions with a priority on finding partners aligned with the long-term national interest of realizing the benefits of growing connectivity—not the short-term gain of those coming with the highest bid.