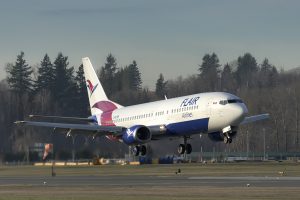 The airline announced plans to expand its route network in September to add the three additional airports. Service will includes direct flights between Toronto to Edmonton and Vancouver to Kelowna, Edmonton with one-stop flights to Toronto (and returns).

“Flair is making significant strides, operating as the only ULCC in Canada. Over the last six months we have expanded our route network, we have increased our aircraft fleet by purchasing two more Boeing 737-400s, we have entered onto the Global Distribution System making it easier for customers to purchase air tickets, and so we are now excited to bring our low fares to these new markets,” said Chris Lapointe, vice-president, Commercial Operations, Flair Airlines.

Flair plans to be operating 12 aircraft by the spring of 2019.

In other new, Flair has launched a new partnership with German carrier Hahn Air.

The Canadian carrier has joined Hahn Air’s network of more than 300 partners to benefit from its distribution services. Specifically choosing the HR-169 product, Flair expands its commercial reach to more than 100,000 travel agencies in over 190 markets worldwide, enabling the issuance of its flights on the HR-169 ticket through the Amadeus GDS.

“We are very excited about this new era of optimized distribution where Flair Airlines has the ability to reach Hahn Air’s large network of travel agencies worldwide,” said Mirza Smajic, director of passenger sales and marketing, Commercial Department Schedule Flights at Flair Airlines. “New business opportunities mean higher yields and, mainly, more satisfied travelers who get to discover some of the best Canadian destinations using our low-cost services.”