Home › Events › Flight Centre Finds A Home For Its Passion

Flight Centre Finds A Home For Its Passion 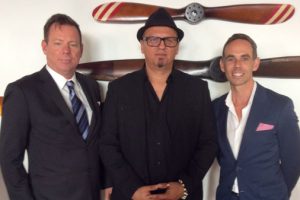 It is a concept that has worked for Flight Centre in other markets around the world, but according to the company’s top executives, its newly opened Toronto Travel Centre takes that concept well beyond anything that it has done anywhere else.

So get ready for the future.

In fact, Flight Centre’s Travel Centre is the first of its kind in Canada, bringing multiple brands and multiple teams together in a space that’s equipped with planning and event space designed to create excitement and an experience for both the customers who are welcomed there and the people who work there.

About 170 of Flight Centre’s preferred partners and VIP clients had a chance to explore the 10,000 square feet of bricks & mortar space that’s located in a heritage building at 425 King Street West (at Spadina) – where business, art and culture intersect – in Toronto during the Grand Opening last night (Sept. 28).

And it is definitely impressive.

Flight Centre president, John Beauvais told the group that the journey to open the Toronto Travel Centre began two and a half years ago, observing that in Toronto, the company saw an opportunity to “take things a step up” and provide an event space as part of the Travel Centre.

And that, Beauvais said, “is something that has never been done in the industry before.”

Describing the 425 King St. W. location as “a home for our passion in travel,” Beauvais said the Travel Centre will offer events for its staff; training; client appreciation functions; destination nights; expos; and a whole lot more.

“We don’t know all of the [kinds of] events we’ll be hosting,” Beauvais told guests attending the Grand Opening. “The sky is the limit.”

With no doubts that the Toronto Travel Centre will be a success, Beauvais said that Flight Centre is already looking at opening Centres in Vancouver, Calgary and possibly, a second one in Toronto.
Stay tuned, the future of bricks & mortar travel seems to have a new design.