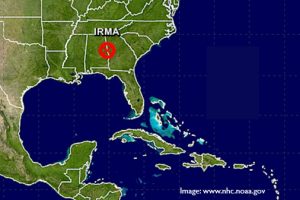 Evacuations: Although the storm has passed some areas, everyone is advised to listen to local officials and stay off the roads unless necessary to keep areas cleared for search and rescue missions.
For evacuation information by county, visit http://www.FloridaDisaster.org/info. The Department of Emergency Management estimates that 6.5 million Floridians have been ordered to evacuate.

Power and Utilities: The current power outage as of 12 p.m. is more than 6.5 million accounts. More than 30,000 restoration personnel have been activated to help restore power as quickly as possible following the storm’s impact. At the direction of Scott, Florida Highway Patrol is actively escorting utility convoys to areas in need to help quickly restore power.

Across the state, guard members will be actively engaged in missions including search and rescue, law-enforcement support, humanitarian assistance and more. The first priorities after the storm passes will be conducting life-saving search and rescue missions, and security operations in affected communities. The Florida National Guard has 1,000 high water vehicles, 13 helicopters, 17 boats and more than 700 generators to support these efforts.

As ports are actively working to reopen, Florida Highway Patrol is staged to escort resupply trucks to gas stations once the roads are safe.

The Florida Department of Transportation (FDOT) has begun damage assessments, bridge inspections and debris clearance in the southern part of the state. FDOT bridge inspectors and maintenance crews have reached Marathon and are pushing down US 1 and into the Keys.

FDOT is working on clearing US-1, Interstate 75, Interstate 95, Interstate 4, Florida’s Turnpike and Interstate 10. They will be followed closely by the United States National Guard and utility companies.

Governor Scott directed the FDOT to suspend tolls across the entire State of Florida in preparation for Tropical Storm Irma. Tolls will remain suspended for the duration of the storm’s impacts to Florida.

Food and Water: The state is working to ensure adequate food resources are available for Florida residents impacted by Tropical Storm Irma, prioritizing activity by areas where landfall first occurred and based upon urgency of need.