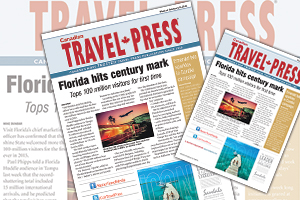 Visit Florida’s chief marketing officer has confirmed that the Sunshine State welcomed more than 100-million visitors for the first time ever in 2015, reports Montreal editor, Mike Dunbar in this week’s digital edition of Canadian Travel Press.

Paul Phipps told a Florida Huddle audience in Tampa last week that the record-shattering total included 15 million international arrivals and he predicted that the total visitor count would balloon to 125 million by 2020.

The 2015 number represented Florida’s fifth record-breaking visitation year in a row, said Phipps, who explained, “That’s 100-million from out of state because we don’t measure in-state tourism.”

He declared, “Quality of life in Florida depends on tourism; the state’s number-one industry and we set records because we welcome everybody.”

According to the CMO, people tell researchers that one of the top five reasons they return to the destination is because they feel welcome.

This year’s Huddle welcomed a total of 675 delegates, including 219 buyers from 141 companies in 17 countries, revealed Phipps. They met with 229 supplier outfits in 14,634 pre-arranged appointments over the two-day duration of the show.

The Tallahassee-based exec pointed out that the bulk of Florida’s international business is generated by what he termed the `foundation five’ countries – Canada, Mexico, the UK, Germany and Brazil.

But he added that Visit Florida has earmarked three key emerging markets – China, India and Australia – and is looking for point-to-point air links with each of them.