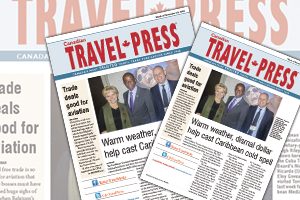 Global free trade is so good for aviation that airline bosses must have breathed huge sighs of relief when Belgium’s French regions finally signed on to the Canada-European Union Trade Agreement (CETA), reports Montreal editor, Mike Dunbar in this week’s digital edition of Canadian Travel Press.

That’s because the groundbreaking pact will likely ease the way for similar accords — starting with the Brexit-bound UK and the United States.

If, after seven years of negotiation the CETA talks had gone down the drain, it would have signalled that trade protectionism was in the ascendancy; and that would have put a severe dent in passenger growth numbers over the next two decades, according to the International Air Transport Association.

Aviation is so sensitive to global trade issues that the latest update to IATA’s long-term passenger forecast predicts that numbers could grow anywhere from a couple of billion to more than seven billion over the next 20 years, depending on the level of government protectionism.

The update noted, “The 20-year forecast puts forward three scenarios. The central scenario foresees a doubling of the 3.8 billion air travellers in 2016 with a 3.7% annual compound average growth rate (CAGR). If trade liberalization gathers pace, demand could triple the 2015 level.”

But IATA’s economists warned, “Conversely, if the current trend towards trade protectionism gathers strength, growth could cool to 2.5% CAGR, which would see passenger numbers reach 5.8 billion by 2035.”

At the recent World Passenger Symposium in Dubai, newly-minted IATA chief exec Alexandre de Juniac declared, “Economic growth is the only durable solution for the world’s current economic woes yet we see governments raising barriers to trade rather than making it easier.”

And the former Air France boss cautioned, “If this continues in the long term it will mean slower growth and the world will be poorer for it.”