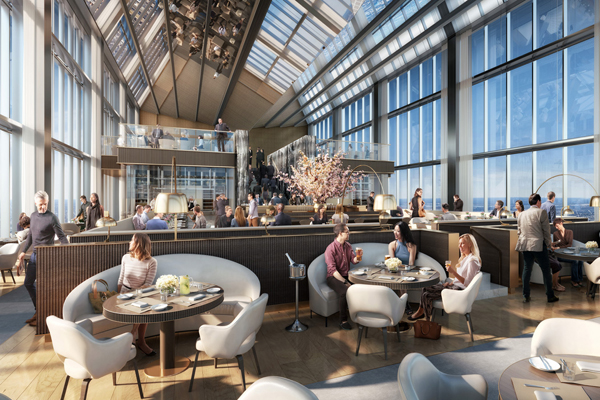 On the uppermost floors of what is now the city’s tallest building and 10th highest in the United States, the all-new Four Seasons Hotel Philadelphia at Comcast Center is now open.

“This exceptional new property represents the very best of Four Seasons. From architecture to design, artistry and innovation, culinary mastery and wellness expertise, we have worked closely with our visionary partners at Comcast and Liberty Property Trust to assemble an all-star team of virtuosos who are elevating Four Seasons service, quality and artistry to new heights,” says Christian Clerc, president, Worldwide Hotel Operations, Four Seasons Hotels and Resorts.

The entire Comcast Center building and the interiors and furnishings of Four Seasons Hotel Philadelphia have been designed by world-renowned architect Norman Foster of Foster + Partners, who has effectively redefined the skyline of one of the country’s most historic cities.

Inside, Artistic Director Jeff Leatham has created stunning floral art in his signature style. His designs are found throughout the property from the ground floor entry to the 60th floor hotel lobby.

At Four Seasons Hotel Philadelphia, which is located between the building’s 48th and 60th storeys, all 180 rooms and 39 suites boast unobstructed floor-to-ceiling views of the city and beyond.

Guests are welcomed upon entry to their guest room by musician, record producer and visual artist Brian Eno’s soundscapes, created exclusively for the hotel. Additional thoughtful touches include at-one’s-fingertips technology and bath products by Guerlain.

In partnership with Comcast, all rooms also offer the award-winning X1 Video Experience, including approximately 300 channel options and a complimentary library of more than 50,000 movies and shows on demand, all searchable with the X1 voice remote.

Michelin starred Chef Jean-Georges Vongerichten has chosen Four Seasons for his Philadelphia debut, literally taking his place at the top of the city’s dining scene with the 59th floor Jean-Georges Philadelphia restaurant and the 60th floor JG SkyHigh cocktail bar.

The hotel’s 57th floor is a haven of health and wellness that includes a large indoor pool that “spills” into the sky; a state-of-the-art fitness centre in partnership with celebrity training guru and Four Seasons Global Fitness Advisor Harley Pasternak; a wellness boutique; and the seven-treatment room Spa at Four Seasons.

Flexible event spaces include the Grand Terrace Ballroom with adjacent foyer and 125-square-metre outdoor terrace, as well as the smaller Arch Ballroom on the fifth floor; an easily accessed executive boardroom on the second floor; and three additional spaces atop the hotel on the 59th floor that can be configured for receptions of up to 80 guests against a backdrop of sparkling city lights.