Full Speed Ahead For European Waterways 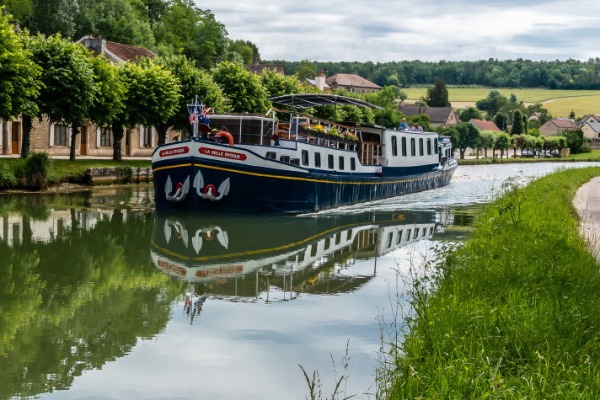 As international travel heats up following the reopening of borders, travellers are rediscovering the joys of luxury hotel barging on the scenic canals of Europe with European Waterways.

In order to meet the surge in demand, European Waterways has been shifting into high gear with the restart of its 2021 season.

Following the launch of L’Art de Vivre in Burgundy several weeks ago, the company is saying “bonjour and bienvenue” with an additional four hotel barges in France offering its six-night, all-inclusive cruises.

European Waterways will also be sailing in Italy. The reopening of the country’s borders is being welcomed with the relaunch of cruises aboard European Waterways’ 20-passenger La Bella Vita, which began on Aug. 1.

Among the vessels in the company’s fleet, La Bella Vita cruises between Venice and the Renaissance city of Mantua. A tour of Venice, dinner with a countess, a visit to the wine cellars of Villa Widmann-Borletti, and a deep dive into Roman, Etruscan and Byzantine history with a tour of Chioggia are just a few of the diverse activities on its itinerary.

“Craic” means “good times” in Ireland – and over on the Emerald Isle, the 10-passenger Shannon Princess never disappoints. The vessel set sail on Aug. 1, allowing guests to once again discover the picturesque loughs along the legendary River Shannon.

Throughout the cruise, guests are treated to tours of castles and stately manors, a visit to a whiskey distillery, a birds of prey demonstration, and ample opportunities to enjoy a pint or two of Guinness or, as they say in Ireland, “the black stuff.”

Meantime, while waiting for the U.K. borders to fully reopen to international travels, locals have been enjoying “staycations” on European Waterways’ hotel barges that include The Magna Carta on the River Thames and the Spirit of Scotland on Scotland’s historic Caledonian Canal.

European Waterways is currently offering fleet-wide specials of 10% off on cabins and whole barge charters this European Summer, valid when booked by Aug. 9. Multi-generational and group charters are available on most cruises, with itineraries that can be modified to meet guests’ unique interests.

These include family-themed excursions, as well as those that focus on golf, gastronomy, and health and well-being. European Waterways’ “Book with Confidence” policy provides flexibility in rescheduling future cruises, should they be impacted by government restrictions.

The health and safety of guests are also top priorities, with strict protocols in place that include crew and passenger temperature checks as well as deep cleaning and disinfecting of all cabins and public surfaces on the boats.

For more, set a course to www.europeanwaterways.com .