Full Steam Ahead in Muskoka 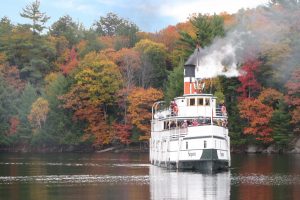 It was back in 1866 that a small, primitive steamer called the Wenonah first began service on Ontario’s Lake Muskoka. Today, the Wenonah II plies those same waters, but these days it’s carrying pleasure cruisers.

The Wenonah II and R.M.S. Segwun – North America’s oldest operating steamship – set off on daily excursions operated by the Muskoka Steamship & Discovery Centre, offering passengers a unique way to experience the fun, romance and history of the Muskoka Lakes.

“Steamships have been a fixture on these waters since before Confederation – but they’re a whole lot more fun now,” says John Miller, president of Muskoka Steamship & Discovery Centre. “We are thrilled to mark the 150th anniversary by offering a wide range of cruises on our historic vessels for sightseeing, dining and special occasions.”

Special for 2016, a limited number of tickets are available for the day-long 100 Mile Cruise on Aug. 20 from 8:30 a.m. to 8:30 p.m. In celebration of the 150th anniversary, both the Wenonah II and R.M.S. Segwun will sail, along with more than 100 antique and wooden boats from Toronto’s Antique & Classic Boat Society, through Lakes Muskoka, Rosseau and Joseph. The 100 Mile Cruise includes lunch and dinner served on-board along with special commentary throughout the day.

A variety of other steamship cruise options are available during July and August, including daily two-hour sightseeing cruises; lunch and sightseeing tours; sunset dinner cruises on Wednesdays and Saturdays; “Millionaire’s Row” cruises every Wednesday, covering a stretch of shoreline famous for grand summer homes; and High Tea in the Royal Muskoka Salon aboard the R.M.S. Segwun – including finger sandwiches, fresh scones with Devonshire cream and strawberry preserve, and tasty desserts, as well as a choice of loose leaf tea provided by Blue Willow Tea Shop. 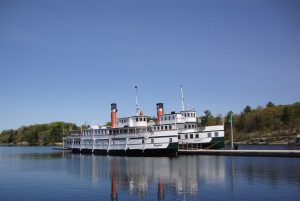