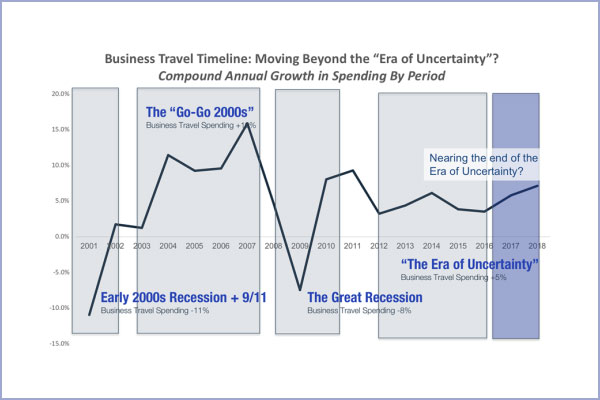 Michael W. McCormick, GBTA executive director and COO, observed that: “This pick-up in growth could signify an end to the ‘Era of Uncertainty’ in global business travel, but rising protectionism is coming at precisely the wrong time.”

McCormick continued: “The direction of trade policy is far and away the biggest wild card that could impact our forecast for global business creating uncertainty that could derail the recovery.”

According to the GBTA BTI report, the Era of Uncertainty has been punctuated by moderate growth in business travel spending, which has been trapped in roughly the 3% to 5% range annually since 2012. The two-year period spanning 2017-2018 is projected to be the strongest two-year period for business travel since the initial recovery from the Great Recession in 2010 and 2011.

In 2018, GBTA expects 18 out of the top 20 business travel markets to outpace their growth average over the last five years. On average, GBTA projects global business travel to expand by 5.2% over the forecast horizon.

The current high-growth business travel era has been fueled by improving economies around the globe. Many of the improvements, however, have been ignited by both monetary and fiscal stimulus, which is likely to lead to policy challenges and slower economic growth down the road. GBTA anticipates the emergence of more downside risks as we move into 2019 including:

And this potential for trade wars is the biggest global risk that GBTA is watching. Drastic increases in tariffs and associated retaliatory measures could have detrimental impacts on the global economy and the global business travel market. An analysis of the mathematical correlation between the two shows nearly 60% of the variability in global business travel spend can be explained by global trade volumes.

For more, go to www.gbta.org .