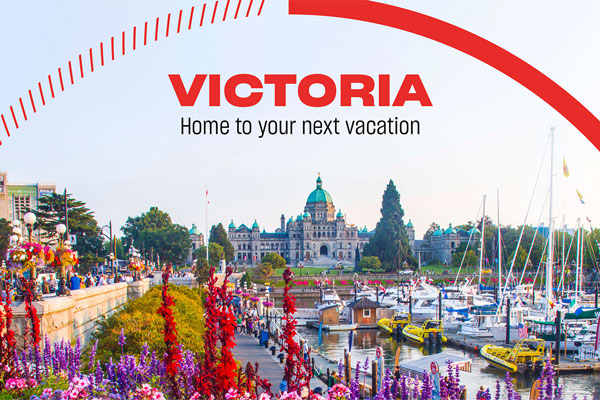 Destination Greater Victoria and Air Canada Vacations are promoting Victoria as a great place for those who want to enjoy some urban life during their vacation and also as a suitable retreat for those eager to experience Mother Nature at the same time.

A Thursday webinar saw Nicole Yamamoto of Destination Greater Victoria praise her destination as “one of the most beautiful, historic and iconic cities” in the country, citing the likes of its many boutique shops in the downtown area; the Royal B.C. Museum, which among other things has exhibits telling of the region’s Indigenous people; and its harbor area, which normally sees many summer festivals.

There is “nature at every turn,” Yamamoto said.

The city’s prime attraction is Butchart Gardens, which dates back over 100 years and generally sees over a million visitors a year eager to see displays that collectively have some 900 varieties of plants.

Yamamoto said Victoria is the warmest year-round city in the country, and that means plenty of outdoor activities from “golf to zip-lines to cold-water diving” are available.

Whale-watching tours enable people to spot killer and humpback whales, with the prime season being April-October. Tour companies are so confident sightings of whales will occur that they offer free following tours if none are spotted.

Other creatures that may be seen in the region include sea lions, seals and bald eagles, with Vancouver Island home to mountainous wilderness.

Air Canada Vacations’ Marigold Frontuna also praised Victoria, saying “there is something for everyone” in it.

Company offerings include its three-night Urban Getaways, and Frontuna suggests that people consider combining Victoria and Vancouver on the same trip, giving them “two beautiful cities in one vacation.”

Those wanting to explore B.C. can opt for the Coastal Wilderness, an 11-night package that includes an 11-day car rental.

Air Canada Vacations sends people to other jurisdictions, including the Yukon and the Prairies.

It also has packages aimed at golfers, including ones that enable people to golf in Banff or Whistler.

Edna Ray of Air Canada told the webinar that “safety first always is what we do,” with her carrier becoming the first in the Americas to begin pre-flight temperature checks in these days of coronavirus.

Yamamoto in turn told the webinar that Victoria has seen “very few cases” of coronavirus since mid-June and most businesses have reopened.