Home › Events › Giving Back To The Community

Giving Back To The Community 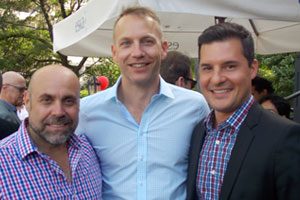 Co-founded by Armando Mendonca and Darrell Schuurman, JUST beCAUSE is all about bringing LGBT travel professionals together and giving back to LGBT organizations across Canada.

Or as Schuurman put it: “We wanted to give back to the community. It’s LGBT tourism networking with a cause.”

The launch event for JUST beCAUSE was in support of the Egale Centre — you can find out more about Egale and its good works by going to http://www.egale.ca — which is a new transitional and emergency housing facility for LGBTIQ2S youth that will open in Toronto in 2017.

“This is an important cause and we are so pleased to be able to support them in their efforts,” observed Mendonca during the event.

And those who attended JUST beCAUSE’s kick-off event had a chance to win a seven-night trip to Vienna – provided by the Vienna Tourist Board, Austrian Airlines and Starwood Hotels & Resorts – that was part of a multiple Pride event draw.

JUST beCAUSE is open to all LGBT travel and tourism professionals and allies and more information is available at http://www.justbecause2016.ca .

JUST beCAUSE’s next networking event will take on Sept. 29, 2016, so watch for details.

Seen in the photo, from l to r, are JUST beCAUSE co-founders, Armando Mendonca and Darrell Schuurman with Ryan Lester of Egale.