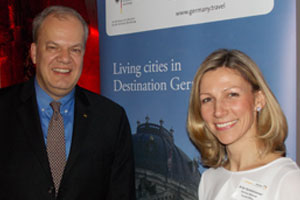 Last night (Feb. 8) was certainly a nasty night in Toronto, but the freezing rain and treacherous road conditions didn’t dampen the spirits of those attending the German National Tourist Offices (GNTO) launch of its 2017 celebrations which highlighted a host of special events, including the 500th anniversary of Martin Luther and the Reformation.

Antje Splettstoesser, the director of the GNTO Canada, reported that while the final numbers for 2016 aren’t in yet, Germany hosted 75.2 million overnight stays between January and November of last year, representing a 1% increase.

Canadian visits, driven by the popularity of river cruising, have grown significantly, with Splettstoesser telling her audience that between 2010 and 2015, there was a 76% increase.

In 2017, the GNTO’s Canadian director said the forecast is for between a 2% to 3% increase in Canadian numbers.

And she also confided that the long-range plan for the GNTO here is to grow its Canadian numbers to 1 million by 2030.

Also on hand for the evening was Lufthansa’s senior director for Canada, Hans DeHaan, who was clearly pleased that 2016 was over and looking forward to 2017.

Considering that LH is in the process of taking delivery of a bunch of brand new Airbus A350s – with all of the latest bells and whistles and then some even niftier features – it’s not surprising that DeHaan is in an upbeat mood about the coming 12 months.

As for the nuts and bolts, DeHaan told the Toronto gathering that LH carried 108 million passengers last year, an increase of 2% over the previous year; it celebrated its 60th anniversary of service to Canada; spent billions – yes, billions – on a major cabin renewal program and ongoing fleet upgrade; and its Premium Economy product has been a huge success.

All in all – and in spite of the weather – it was a good news night for Germany, Lufthansa and all those on hand for the celebrations.

In the photo, from l to r, are Lufthansa’s Hans DeHaan and the GNTO’s Antje Splettstoesser.