Home › Agent Incentives › Goway Is In A Festive Mood

Goway Is In A Festive Mood 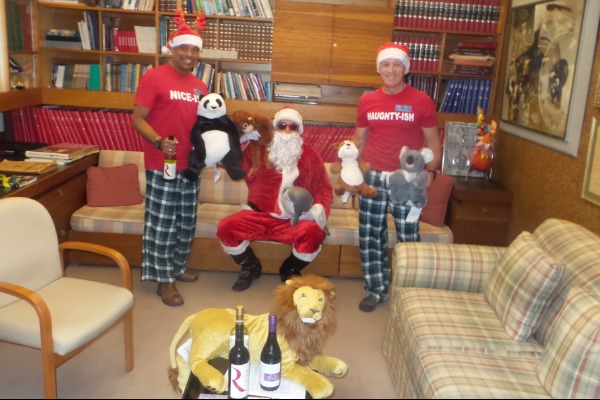 ‘Tis the season for Goway to once again its demonstrate its generosity.

Company staffers made the rounds in Toronto on Friday, thanking people in the travel industry for their support by giving them wine and displaying plush animal toys – among them a monkey, a lion, a panda and a bulldog – that are representative of the different parts of the world Goway visits.

Goway capped Friday by donating the critters to Toy Mountain, which is collecting Christmas gifts for Toronto children from low-income families.

The different animals underscore that Goway doesn’t simply offer the South Pacific but has a worldwide presence.

Meanwhile, Goway’s Aubrey Schmidt (sporting the Naughty-ish shirt) and Sam Cottar (wearing the Nice-ish shirt) note that December enables travel agents to double down on Goway rewards card. “Still time to win a on the Passport to a free fam…. Rumour had it, they are heading DU (DownUnder),” Schmidt and Cottar said.

Next year marks Goway’s 50th anniversary and the company’s line-up includes Journeys of a Lifetime and two special signature trips.

Journeys of a Lifetime include Cape to Cairo, which begins in Cape Town in September and ends in Cairo in October, visiting Botswana, Zimbabwe, Zambia, Tanzania, Rwanda, Kenya and Ethiopia in-between South Africa and Egypt.

The other is called Natural Selection and includes Ecuador and its Galapagos Islands; and Machu Picchu, Peru. The trips can be done back to back with each other.

Seen here are Schmidt and Cottar with St. Nicholas, AKA Santa Claus, AKA Pere Noel.