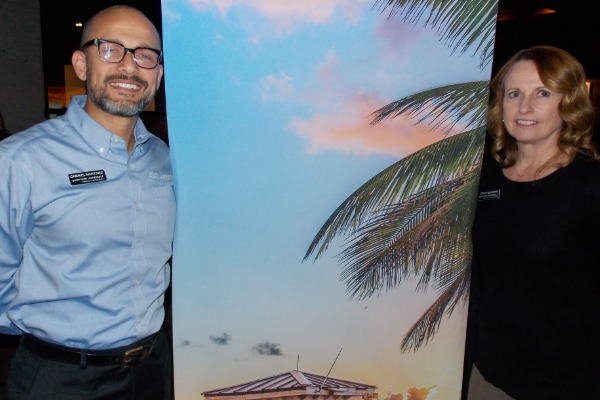 There’s no doubt what the message was last night in Toronto as travel trade types were welcomed at one of the city’s popular downtown gathering places. It was pretty simple: Greater Fort Lauderdale loves its Canadian visitors and it was up here to make sure it stayed ‘top of mind’ when travel retailers are looking for sunny spots to send their clients.

Chatting with Press Today before the formal presentation, Tracy Vaughan, Sr. VP Tourism and Travel Industry Sales, Greater Fort Lauderdale Convention and Visitors Bureau, made it clear that travel agents were an important part of the CVB’s plans, observing that that shouldn’t come as a surprise as “agents are Greater Fort Lauderdale’s original influencers.”

And Vaughan added, agents are becoming increasingly important as more and more milennials look to them for help arranging their vacations.

In fact, Vaughan confided, that looking to the longer terms, she would like to have a rep in the Canadian market promoting the destination and working with the travel trade, pointing out that Greater Fort Lauderdale isn’t just competing with other US sun destinations, it also has to compete with the Caribbean, Mexico, Europe, Asia, Africa – basically, the world.

Now while competition may be tough, Vaughan was upbeat in her view of the Canadian market, noting that over 725,000 air seats from across Canada are going into Greater Fort Lauderdale and the CVB’s own research also shows the 83% of passenger arriving at its airport stay in Greater Fort Lauderdale – their not just passing through.

Vaughan also noted that with all this lift, Greater Fort Lauderdale is an easy destination for Canadians to get to when they’re looking to escape winter and enjoy some time in the sun.

Those on hand heard from Lidia Gorzelany of the City of Pompano Beach; Madelyn Caban from DoubleTree by Hilton/Hyde Hollywood Beach; Rocio Waldie of the Bonaventure Resort & Spa; William Pujol of the Margaritaville Hollywood Beach Resort; and special guest, Tim Schwartzman of the Sawgrass Recreation Park.

Seen here, from l to r, are Greater Fort Lauderdale CVB’s Gabriel Martinez and Tracy Vaughan during the event in Toronto last night.