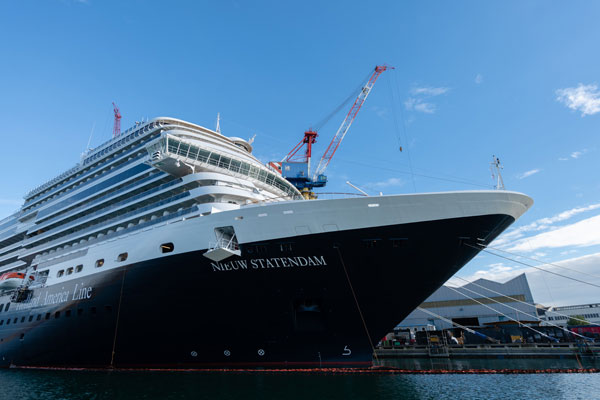 “Today the Holland America Line family celebrates the addition of Nieuw Statendam to our fleet, and it’s a proud moment for everyone involved,” said HAL president Orlando Ashford. “Thank you to our partners at Fincantieri and our own team members who worked diligently to deliver the ship looking more stunning than we imagined. Nieuw Statendam represents our continued evolution of adding exciting new experiences while maintaining the hallmarks that have made Holland America Line a leader in premium cruising.”

The ship will head to its summer homeport of Amsterdam, the Netherlands, in May and sail a series of northern Europe, Baltic and Iceland cruises before making its way to the Mediterranean in September for cruises out of Civitavecchia.

The 99,902-ton vessel accommodates 2,666 guests and features purpose-built staterooms for families and solo travellers among its 1,377 guest accommodations.

While much of the ship’s design is similar to Koningsdam, the first Pinnacle Class ship, Nieuw Statendam has exclusive public spaces and its own style created by leading hospitality designer Adam D. Tihany and designer and architect Bjørn Storbraaten.

Onboard entertainment features the innovative Music Walk offering a variety of authentic live musical experiences and genres unlike any other at sea. These include the debut of the new Rolling Stone Rock Room with classic rock hits; Lincoln Center Stage, with chamber music; Billboard Onboard, with chart-topping hits; and the popular B.B. King’s Blues Club, bringing the best of Memphis music to sea.