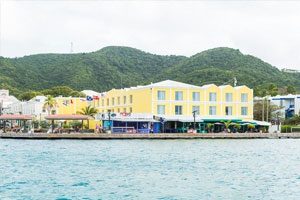 With the show Hamilton: An American Musical sweeping the United States, making it almost impossible — and impossibly expensive — to score tickets, tourists can opt for the real thing.

Located in the midst of historic Christiansted, U.S. Virgin Islands, the Caravelle Hotel & Casino is partnering with CHANT to offer a Hamilton Tour Experience.

The three-night package for two includes a bottle of rum and two tickets to CHANT’s Alexander Hamilton’s Christiansted Historic Tour.

One of the newest additions to a full roster of tours on offer through Crucian Heritage And Nature Tourism, Inc., Alexander Hamilton’s Christiansted Historical Walking Tour takes visitors through a typical day in the life of the young man who grew up on St. Croix and went on to become a founding father of the United States and one of the country’s most prominent statesmen.

The 2½- hour tour begins at the Old Danish Customs House, just a five-minute walk from Caravelle Hotel & Casino, and continues through Christiansted with stops at the site of the dry goods store Hamilton’s mother owned and the lower middle-class neighborhood where Hamilton and his mother lived alongside working-class people of European ancestry and free people of colour.

The tour also includes visits to some of the places Hamilton lived and worked after he was orphaned at the age of 13, including Beekman and Kruger, an import/export trading company where Hamilton served as a clerk.

“As a young person of 14 or 15, he was running the business for Mr. Kruger,” says Frandelle Gerard, executive director, Crucian Heritage and Nature Tourism, Inc. “It’s where he refined his finance skills. He was responsible for tracking shipments in and out of that company.”

“Of course, the reality of life in St. Croix at that time involved the trans-Atlantic slave trade,” Gerard continues. “There’s some proof that he had to record enslaved people arriving. That and his life in Christiansted may have informed his position as an adamant abolitionist all of his life.”

Gerard says the Alexander Hamilton Tour is appropriate for people of all ages: everyone from families with young children to Hamilton historians and college professors.

The official tour guide, V. Celeste Fahie, can tailor the itinerary to reflect the interests of the group. For example, kids love touring Fort Christianvaern and its historic cannons while history buffs may be more intrigued exploring the actual places where Hamilton lived and worked.