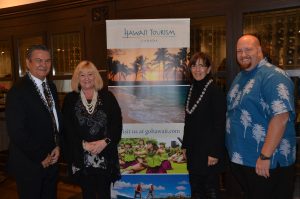 After a drop in Canadian arrivals despite booming overall growth, the Hawai’i Tourism Authority has its sights set on Canada.

The association has not only appointed VoX International as the local representation for Hawai‘i Tourism Canada – the first time Canada has separate representation in North America – but was on hand to meet with travel partners yesterday (March 7) to highlight the destination.

“The Canadian visitor is very, very important to us. It’s our No. 2 international travel market,” George Szigeti, President and CEO of Hawai’i Tourism Authority, told PressToday on hand from Hawai’i. “Overall 2016 was our best year ever on arrivals, visitor spend and tax revenue generated for the state. It’s by far and away our No. 1 economic driver in Hawai’i. We’ve had five straight years of record growth in Hawai’i on the visitors so the trend for Canada has gone the opposite. We realize currency had a lot to do with that, but we really feel that having boots on the ground here is going to help us get back. [Canada] was the only market that we really were down this year.”

While Canadians — who have a longer overall stay than any other international visitor at 12.6 days — have always been drawn to Maui and Kaui, he says each island has unique features and experiences to draw in travellers.

“Where else could you go in North America and see the lava pouring into the ocean, and watch the island growing in front of you?” he says.

Along with a new mobile-friendly website featuring virtual reality on each island launching at the end of April, travel agents can take advantage of a Hawai’i destination specialist training program.

With millennials now out-population the boomers, he says technology is one way to stay relevant to those travellers.

“They’re a different traveller. They get to Hawai‘i and they get on their smart phone and they go where to locals hike? Where do locals swim? Where do locals eat?” he says. “It is a global competitive market, we are competing against markets all over the world now – the sun, sand surf destinations – so we make sure that we keep Hawai‘i relevant through our Hawaiian culture, our sense of place, our aloha spirit. We put a lot of energy into protecting our national resources.”

One initiative that will be sure to attract some Torontonians is a two-game exhibition face-off between the Toronto Raptors and the Los Angeles Clippers in the fall.