Home › Destinations › Hulk Roars Back to Life at Universal

Hulk Roars Back to Life at Universal 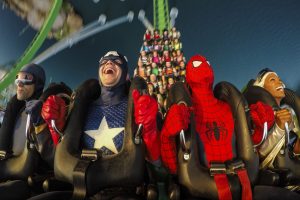 The Incredible Hulk Coaster at Universal’s Islands of Adventure is back.

After a special countdown to the ride’s reopening, Marvel Super Heroes led guests inside the attraction and became the first official riders on the newly revamped coaster.

The Incredible Hulk Coaster features thrilling new enhancements, including: a new ride vehicle with a sleek, modern design; an all-new onboard ride score exclusively produced by Patrick Stump – front man of Fall Out Boy; an original storyline that places guests at the hands of an experiment led by General “Thunderbolt” Ross; a completely redesigned queue which appears to guests as a high-tech, scientific facility centred around a massive Gamma Core.