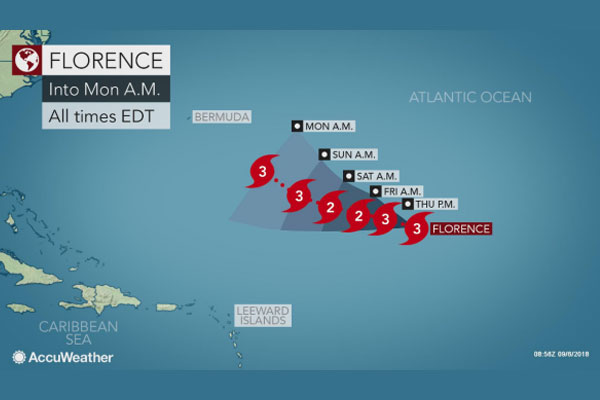 Florence, which recently became the first major hurricane (Category 3 or higher) of the 2018 Atlantic season, is forecast to push close enough to Bermuda and the US East Coast to have indirect impact and may evolve, warn officials, into a serious direct threat.

While Florence is likely to fluctuate in strength due to cool water and disruptive winds into the end of the week, its projected path takes the hurricane over very warm water with low wind shear this weekend into next week.

Wind shear is the increase in wind speed and change in wind direction with either increasing altitude or over a horizontal distance.

“An area of high pressure over the central Atlantic will bridge westward and join with an existing high pressure near the US East coast over the next several days,” says AccuWeather hurricane expert Dan Kottlowski. “This setup will guide Florence on a west to northwesterly course into next week.”

If the high pressure area weakens next week, then Florence may be able to curve northward then northeastward out to sea with impacts limited to an indirect nature in the US.

However, if the high pressure area remains strong, then Florence may complete a 3,500-mile-long journey over the Atlantic and be guided right into the US East Coast somewhere from the Carolinas to southern New England sometime during Wednesday or Thursday of next week.