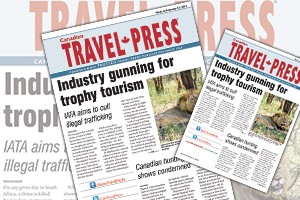 On any given day in South Africa, a rhino is killed by poachers every seven hours, while 54 elephants are slaughtered across the continent.

If left unaddressed, both species will be extinct in the wild within the next 25 years, reports Montreal editor Mike Dunbar in this week’s digital edition of Canadian Travel Press.

The plight of the pangolin, or scaly anteater, is even worse. More than one million are estimated to have been poached over the past decade.

While research has shown that 72% of illegal ivory is trafficked to Asia by sea, evidence also indicates that airlines – albeit unwittingly – are also being used to transport illegal wildlife products.

In July last year, customs officials at Zurich airport seized 262 kilos of ivory and a kilo of lions fangs and paws packed into eight suitcases belonging to three passengers en-route from Tanzania to China.

Only recently at LHR’s terminal four, 110 kilos of ivory was discovered in baggage left in transit from Angola to Germany.

And, on a grander scale, 16 passengers travelling from Angola to Vietnam via Ethiopia, Hong Kong and South Korea got a prison sentence of six months each when a customs inspection triggered by a technical grounding found almost 800 kilos of ivory in 32 suitcases.

A few years ago at Bangkok’s airport, a woman was arrested after officials found a tiger cub packed in her baggage along with stuffed tiger toys; about the same time, a passenger from China was caught in Kuala Lumpur with 9,000 baby star-back tortoises in his bags, of which 1,500 had already died.

The issue of wildlife trade came to a head following the killing of Cecil the lion in Zimbabwe, prompting a number of IATA airlines to announce voluntary bans on the carriage of legal wildlife products.

The trade association itself said it couldn’t comment on commercial decisions made by individual members.

But, at a recent press briefing in Geneva Jon Godson, an assistant director with IATA’s aviation environment department, stated that the association was focusing on supporting enforcement agencies in its quest to combat illegal trafficking.