Hotel Group Eliminating Single Use Plastics From All Hotel Rooms 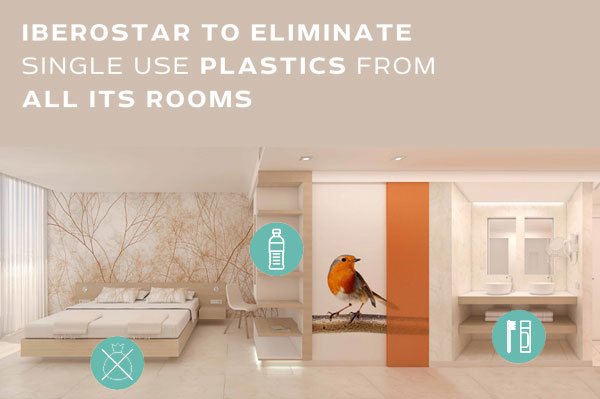 Reducing plastic pollution is one of the key objectives of the sustainability policy on which Iberostar’s business strategy is based.

Together with promoting certified sustainable fishing, the protection and conservation of coral reefs and care of the Mediterranean Sea, reducing plastic pollution is one of the key actions included in the “Wave of Change” initiative, part of the Iberostar Group’s sustainability policy that channels its commitment to the environment.

Due to this initiative, products such as bathroom amenities, bags for slippers or clothing and minibar items, will be replaced by products made of alternative materials such as glass, compostable cardboard or renewable plant-based items.

Eliminating the 1.5 million plastic bottles that will no longer be used in Iberostar hotel rooms in Spain each year will result in the removal of 43 tonnes of plastic waste.

The project began in 2017 following an internal corporate audit that detected all products containing plastic.

Following a campaign conducted in Iberostar hotels to cut down on plastic straw use and replace them with biodegradable alternatives, usage has been reduced by 10%, which means saving 10 million units from a landfill.

If all these straws were placed in a line, they would extend for about 1,900 kilometres or the distance between Toronto and Winnipeg.

Through initiatives such as these, the Iberostar Group involves employees, partners and even guests willing to join the wave of change.

For more, go to http://iberostarsingleuseplasticfree.com/iberostar-en/ .